What 'Good' Dads Get Away With: Why Do Progressive Men Still Refuse To Do Their Share Of Household Work? 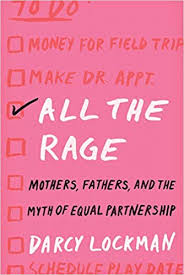 New York Times op-ed:  What ‘Good’ Dads Get Away With, by Darcy Lockman (author, All the Rage: Mothers, Fathers, and the Myth of Equal Partnership (2019)):

When my husband and I became parents a decade ago, we were not prepared for the ways in which sexism was about to express itself in our relationship. Like me, he was enthralled by our daughters. Like him, I worked outside the home. And yet I was the one who found myself in charge of managing the details of our children’s lives.

Too often I’d spend frantic days looking for spring break child care only to hear him ask, “Oh, there’s no school tomorrow?” Or we’d arrive home late with two tired kids, and instead of spearheading their nighttime routine he’d disappear to brush his own teeth. Unless I pointed out these lapses (which he’ll tell you I often did, and I’ll tell you I often did not), he was unaware.

We’ve all heard this story before. Thinking about my own relationship, and watching the other couples I knew, I kept wondering: Why is this still happening?

The optimistic tale of the modern, involved dad has been greatly exaggerated. The amount of child care men performed rose throughout the 1980s and ’90s, but then began to level off without ever reaching parity. Mothers still shoulder 65 percent of child-care work. In academic journals, family researchers caution that the “culture of fatherhood” has changed more than fathers’ actual behavior.

Sociologists attribute the discrepancy between mothers’ expectations and reality to “a largely successful male resistance.” This resistance is not being led by socially conservative men, whose like-minded wives often explicitly agree to take the lead in the home. It is happening, instead, with relatively progressive couples, and it takes many women — who thought their partners had made a prenatal commitment to equal parenting — by surprise. Why are their partners failing to pitch in more?

The answer lies, in part, in the different ways that men and women typically experience unfairness. Inequality makes everyone feel bad. Studies have found that people who feel they’re getting away with something experience fear and self-reproach, while people who feel exploited are angry and resentful. And yet men are more comfortable than women with the first scenario and less tolerant than women of finding themselves with the short end of the stick. Parity is hard, and this discrepancy lays the groundwork for male resistance.

Though many men are in denial about it, their resistance communicates a feeling of entitlement to women’s labor. Men resist because it is in their “interest to do so,” write Scott Coltrane and Michele Adams, leaders in the field of family studies, in their book, “Gender and Families.” By passively refusing to take an equal role, men are reinforcing “a separation of spheres that underpins masculine ideals and perpetuates a gender order privileging men over women.” ...

The couples offered three explanations for this labor imbalance. The first was that women take over activities like bedtime, homework and laundry because men perform these tasks inadequately. ... The second explanation involved forgetting or obliviousness. ... Finally, some men blamed their wives’ personalities. ...

All this comes at a cost to women’s well-being, as mothers forgo leisure time, professional ambitions and sleep. Wives who view their household responsibilities “as unjust are more likely to suffer from depression than those who do not,” one study says. When their children are young, employed women (but not men) take a hit to their health as well as to their earnings — and the latter never recovers. Child-care imbalances also tank relationship happiness, especially in the early years of parenthood.

Division of labor in the home is one of the most important gender-equity issues of our time. Yet at the current rate of change, MenCare, a group that promotes equal involvement in caregiving, estimates that it will be about 75 more years before men worldwide assume half of the unpaid work that domesticity requires.

If anything is going to change, men have to stop resisting. Gendered parenting is kept alive by the unacknowledged power bestowed upon men in a world that values their needs, comforts and desires more than women’s. It’s up to fathers to cop to this, rather than to cop out.

The Atlantic:  Mothers Should Be Less Grateful, Darcy Lockman:

I've spent the past year interviewing married or cohabiting heterosexual mothers across the United States about the distribution of child-care labor in their home. Most of them did the lion’s share of the work and were angry with their partner. Yet many of them told me they were “grateful.” Over and over again, I heard women complain that they were doing more than their partners, only to then insist that they were lucky to have any help at all. ...

Gratitude is a brand of benevolent sexism, a force that repels change. To offer thanks for whatever contributions men happen to make reinforces the implicit idea that parenting is women’s work, that 65/35 is a very fine place to stop. For too long, women have paid for this imbalance with their well-being—financially, emotionally, existentially. Only once gratitude is relinquished for righteous anger will gender rules in this realm be rewritten. Then we can land somewhere different: not grateful, only glad.

Maybe it's the theory—that woman and men are the same—that's the real problem here.

"... because men perform these tasks inadequately"
According to who? If you want to unilaterally set perfectionist standards, you've just volunteered to be the person designated to meet them. It doesn't take more that once or twice to have someone re-load the dishwasher or re-clean a bathroom while berating you for having done it "inadequately" to train someone to not even attempt it. There's a lot of women out there with Felix Unger-style perfectionism ideas.

Men and women are different and bring different things to parenting that, I would suggest, are of equal value. To take on the example in the story that was clearly stinted against the father, my kids would learn more from me (the lazy Dad) who makes them brush their own teeth so that I have time to brush my own which makes the family more efficient overall in the long run than they do from my wife puts the tooth paste on the brush for them and checks their teeth afterward. She's the nurturer, which is what makes Mom's great, I'm the one who makes my kids do it themselves so they learn (which makes me a great Dad). The same people who talk about how the world needs more diversity are the ones who want zero diversity between the genders. I'm happy my kids have diversity in our home...it makes life interesting and I think it's the best thing for them.