Like flipping a light switch, Vanguard has figured out a way to shut off taxes in its mutual funds.

The first to benefit was the Vanguard Total Stock Market Index Fund. Investors’ end-of-year tax forms abruptly stopped showing capital gains in 2001, even as the fund went on to generate billions of dollars of them. By 2011, Vanguard had flipped the switch in 14 stock funds. In all, these funds have booked $191 billion in gains while reporting zero to the Internal Revenue Service.

This astounding success gives Vanguard funds an edge over competitors. Yet the world’s second-largest asset manager has avoided drawing attention to it. Top executives at the Malvern, Pennsylvania-based firm don’t want U.S. policymakers looking too closely at how they’re doing it, according to a former insider.

But a review of financial statements and trading data shows that Vanguard relies substantially on so-called heartbeat trades, which wash away taxes by rapidly pumping stocks in and out of a fund. These controversial transactions are common in exchange-traded funds—a record $98 billion of them took place last year, according to data compiled by Bloomberg News—but only Vanguard has used them routinely to also benefit mutual funds.

Here’s how it works: Vanguard attaches a more tax-efficient ETF to an existing mutual fund. Then the ETF siphons appreciated stocks out of the mutual fund without incurring taxes, often using heartbeat trades. Robert Gordon, who has written about the concept and is president of Twenty-First Securities Corp. in New York, calls it a tax “dialysis machine.” 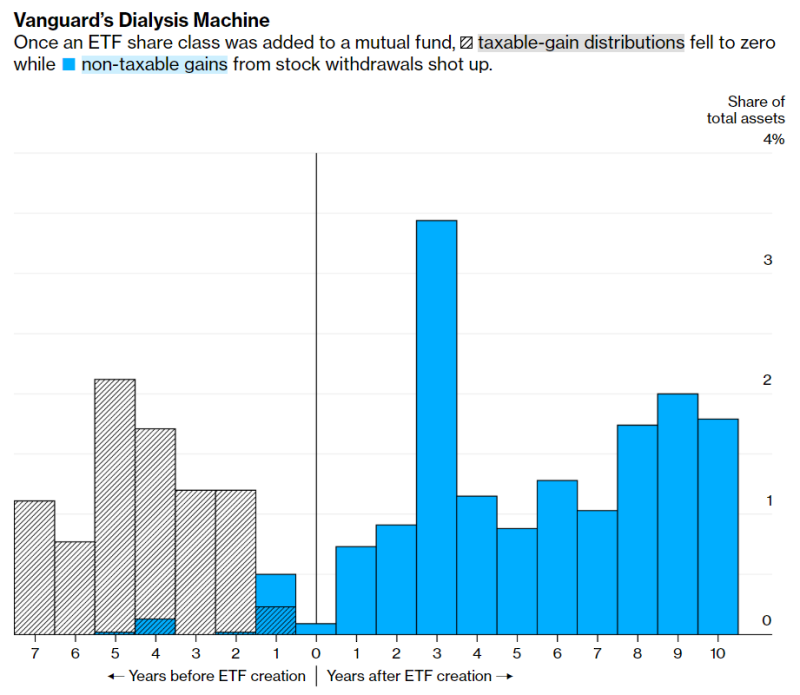 Vanguard even got a patent on the design, valid until 2023, so competitors can’t copy it. ...

Although the dialysis machine has attracted little notice outside Vanguard, it has been controversial within the firm, according to two people with knowledge of the matter. Some employees have raised questions about whether it’s appropriate to use ETFs to wipe away capital gains built up years earlier in mutual funds. ...

Vanguard has discussed licensing its hybrid ETF-mutual fund design to other firms, but no deal has come to fruition, according to people with knowledge of the talks. ...

Mario Gabelli, founder of mutual fund manager Gamco Investors Inc., said he’s long called for ending ETFs’ tax advantage over mutual funds. Vanguard may have found a way to level the playing field by using heartbeats, he said, but he’s not tempted to copy it.

“You’re going against the intent of the system and finding ways to manipulate it,” Gabelli said. “It’s not good for confidence in the capital markets, and shame on Vanguard for doing it.”