The Benefits Of Sleeping With Your Dog 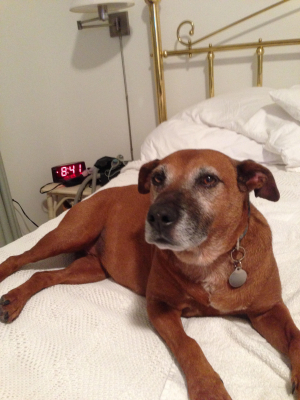 New York Times op-ed:  I Traded the 12-Step Program for a Dog, by Tyler Watamanuk:

Most nights, my dog River sleeps in my bed. He is a red heeler, although his speckled coat is closer to an auburn-bronze than any shade that could be earnestly called “red.” Before I fall asleep, he jumps onto the comforter and curls up into a furry crescent moon next to me, nuzzling his rust-colored snout into my chest and wedging himself somewhere in between my limbs and heart.

When he rests beside me, I can feel my heartbeat slow down ever so slightly, and a woozy solace unknots my restless brain. For the two years we lived on a noisy Brooklyn street, the harsh sounds of the big city outside my window even seemed to soften. His presence feels more comforting than the slow euphoria of hydrocodone or the dizzying blackout of too many whiskey sodas — feelings I was well acquainted with before I got sober and welcomed this dog into my life.

This calming effect felt unmistakable and tangible, like the feeling of walking barefoot on freshly cut grass. I thought I might be imagining it, so I eventually looked it up: According to Psychology Today, lying next to a dog’s rhythmic breathing can help lull you to sleep and also increase the flow of oxytocin, a hormone associated with affection and happiness. Speaking from experience, I believe both of these things to be true.

I got River when I was about six months sober and still sporadically attending Alcoholics Anonymous meetings. The program, full of kind souls and too-big personalities in equal measure, wasn’t for me. ...

Quitting drinking made me restless, and a youthful herding dog that required a lot of my attention proved to be an unlikely remedy. (Seeing a therapist helped, too.) River subconsciously took on a new role in my life when I got sober: He gave me the structure that I had long failed to provide myself; he added a routine to my life and forced me to be present during days when I just wanted to float in space. He depends on me to take care of him, and I don’t want to let him down. On our morning and evening walks to the park, the fresh air felt cathartic in my lungs, much like the feeling I got from sitting on folding chairs in those meetings.

My dog has earned his spot in my bed and every ounce of my energy I’ve ever given him. He showed me that I could find a path to sobriety outside of A.A. and the Big Book. The root of my drinking, I believe, was a lifelong feeling of being an outsider — like no one understood or saw me and I was inadequate or insignificant. On the hardest days, he’s been an unmatched comfort to me, providing unrelenting love without hesitation or limit.

Some nights, I lay awake and think about the things I miss about drinking, allowing myself to feel the indescribable sense of loss that comes when an alcoholic gives up booze. However, when those thoughts jostle in my head, I can still feel River sleeping next to me, and I’m just happy that I’m no longer alone.

A dog's gifts to a faithful and trustworthy human are beyond measure.

A dog's heavy sleep breathing or even snoring has always made me drowsy, but human snoring keeps me awake. Odd, isn't it? Anyway, love your article. Congratulations on your sobriety and your lovely dog.

Beautiful post. I've read your blog posts (via Instapundit) for many years. This one surprised and touched me.

Congratulations on both your ongoing sobriety AND finding the love of a good Dog. Both are priceless. May you and River have many long and happy walks in the park together.