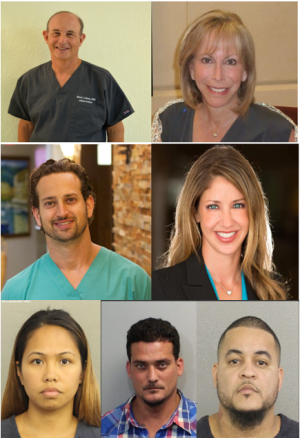 The late discovery of data on a cell phone owned by accused Dan Markel murderer Katherine Magbauna which contains private attorney-client communications has forced a delay to the long-awaited trial set to begin in less than two weeks.

Magbauna and the father of her children Sigfredo Garcia were set to stand trial starting June 3.

Prosecutors were able to extract the data from the phone, which Magbanua had when she was arrested in October 2016, last week using newly discovered technology. A search warrant was approved May 16. The data was reviewed Wednesday when Assistant State Attorney Georgia Cappleman said the privileged information was found. ... Cappleman brought the information before Leon Circuit Judge James C. Hankinson Thursday.

Hankinson set a June 18 case management conference after Magbanua and Garcia’s attorneys renewed a motion for a continuance they've asked for several times in the past two weeks so they can continue to review evidence. ...

Phil and Ruth Markel in a statement expressed grief at the most recent delay in the case. "The Markel Family is deeply disappointed by today’s continuance. In the nearly five years since Dan was brutally assassinated, the Markels have endured unfathomable grief and loss," they said through their attorney Orin Snyder. "They continue to suffer, some of them in declining health, with each passing day. Justice delayed will continue to be justice denied for the Markel Family and all who knew and loved Dan."

I'm not a lawyer, thank goodness. But, surely, there must be a way to reform the criminal justice system. These delays are so far over the top, it is heartbreaking.