Hemel: Trump's Tweatstorm Gloating About The 'Sport' Of Tax Dodging Gives House Ammunition In Fight To Review His Tax Returns

The disclosure this week that Donald Trump accumulated a staggering $1.17 billion in losses from 1985 to 1994 was not, in itself, terribly surprising to anyone who has followed Trump’s financial travails. That’s because the same New York Times reporters who broke this week’s story — and who won a Pulitzer Prize for their investigations into the president’s personal finances — had previously unearthed state tax returns from 1995 showing that Trump claimed tax losses of close to $1 billion. What’s truly stunning, however, is how Trump responded to the news.

Rather than attributing the losses to business troubles from which he ultimately bounced back, President Trump insisted instead that the losses were conjured up to avoid taxes. “Real estate developers in the 1980’s & 1990’s, more than 30 years ago, were entitled to massive write offs and depreciation which would, if one was actively building, show losses and tax losses in almost all cases,” Trump tweeted Wednesday morning. “Much was non monetary. Sometimes considered ‘tax shelter,’ ” he continued, adding that for real estate developers like him, tax ploys were “sport.” 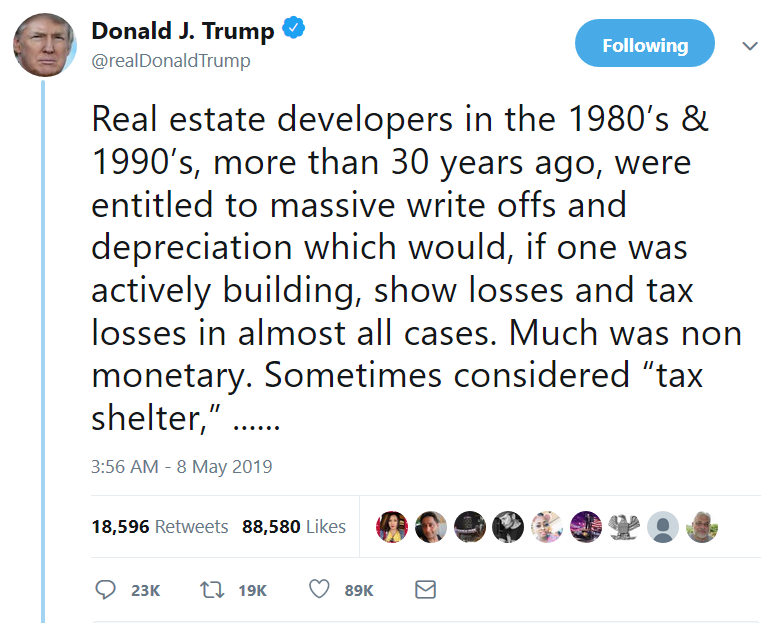 Never mind that the 1990s were not by anyone’s count “more than 30 years ago” — math has never been our commander in chief’s strong suit. What’s mind-blowing about Trump’s morning tweetstorm is that the president of the United States — who has a constitutional responsibility to take care that the laws, including the tax laws, are faithfully executed — is gloating about his own efforts to skirt the tax code. And he is doing this in full view of his 60.1 million Twitter followers, only some of whom are Russian bots. The man who sits two rungs above the IRS commissioner in the executive branch’s organizational chart is bragging that tax dodging is one of his pastimes.

Some of Trump’s tax minimization moves were, concededly, kosher. It’s perfectly legal, for example, to claim depreciation deductions for real estate, which are intended to reflect the gradual decline over time in the value of buildings and fixtures. Far more dubious, however, were Trump’s attempts to write down his debts in the early 1990s without reporting the forgiven loans as income on his tax returns. And Trump’s efforts to minimize estate and gift taxes on transfers of wealth from his father, Fred, sometimes amounted to — in the Times’s words — “outright fraud.” ...

All of which makes the Times’s revelations — and Trump’s nonchalant response — directly relevant to the escalating battle over his tax returns. The perception that the president is a tax cheat, a perception perpetuated by the president’s own words, presents a genuine difficulty for the federal tax system. Our system relies on voluntary compliance — on the idea that individuals and firms will report their income honestly and pay their taxes promptly without the IRS having to track them down. It’s a system that ultimately rests on the faith of the citizenry. When the man on top boasts that taxpaying is beneath him, that essential faith is frayed. ...

While the urgency of the Ways and Means Committee’s inquiry should have been apparent already, Trump’s tweets are one more reminder. If the president won’t release his returns to the public, then the least we can demand is that a bipartisan panel review those filings and assure us that the president is not a tax scofflaw — and if he is, that the IRS isn’t letting him off the hook. Until then, ordinary Americans will have reason to wonder why they are working hard to fund a government whose leader seems to think that taxpaying is just for chumps.

President Trump on Wednesday defended the more than $1 billion he reported in business losses between 1985 and 1994, a previously undisclosed amount revealed in a New York Times investigation, as a best practice that other real estate developers had also used.

Yet even as he tried to explain in a pair of Twitter posts that showing “losses for tax purposes” was considered a “sport” among real estate developers like himself, the president also said The Times’s account was “a highly inaccurate Fake News hit job!”

It was not immediately clear what specifically in The Times investigation Mr. Trump disputed.

The whole tax thing is nonsense. Trump is climbing in the polls and the Democrats are desperate. It has no relevance to anything.

"Over and over again courts have said that there is nothing sinister in so arranging one's affairs as to keep taxes as low as possible. Everybody does so, rich or poor; and all do right, for nobody owes any public duty to pay more than the law demands: taxes are enforced exactions, not voluntary contributions. To demand more in the name of morals is mere cant." J. Learned Hand

I had no idea Congress was in the law enforcement business.