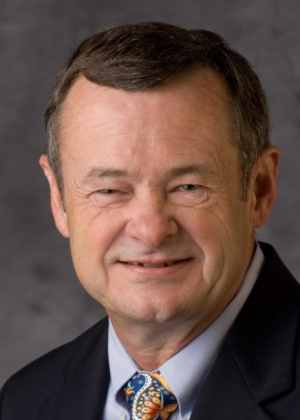 On May 20, the Broad College lost a beloved friend and mentor: Ed Outslay, Deloitte/Michael Licata Endowed Professor of Taxation.

During his tenure at the college from 1980 to 2019, Ed was known as a passionate academic, impactful mentor and devoted community volunteer. ...

Over the course of his long and distinguished career, Ed gathered a remarkable list of accomplishments. He was the co-author of three tax textbooks, testified before the U.S. Senate Finance Committee and made presentations to the Treasury, IRS and Office of Tax Analysis. He won numerous awards from the Broad College and MSU, including the Distinguished Faculty Award, Presidential Award for Outstanding Community Service, Withrow Teacher-Scholar Award, Curricular Service-Learning and Civic Engagement Award and department teaching and research awards.

“Words cannot adequately describe all of Professor Outslay’s many contributions to our students, to the academy and to the accounting profession. Ed was a consummate academic. He was passionate about teaching and learning, deeply committed to the students, and immersed in the study of taxation,” said Sanjay Gupta, Eli and Edythe L. Broad Dean of the Broad College of Business. “As one of his doctoral students, I can say that Ed forgot more about his discipline in a day than many of us have learned in a lifetime. He leaves behind a legacy of what it truly means to be a scholar, teacher, mentor, friend and a gentleman. This a great loss for the entire Michigan State University community and especially for all of us in the Broad College.”

Within the accounting profession, Ed won the American Accounting Association (AAA) lifetime Ray M. Sommerfeld Outstanding Tax Educator Award, the American Taxation Association (ATA) Distinguished Service Award, the ATA Teaching Innovation Award and the MACPA Distinguished Achievement in Accounting Education Award. Ed also served as president of the ATA and editor of the Journal of the American Tax Association. Recently, Ed earned the 2017 AAA/J. Michael and Mary Anne Cook/Deloitte Foundation Prize for consistently demonstrating the attributes of a superior teacher in the discipline of accounting at the graduate level. He also received the 2018 ATA/Deloitte Teaching Innovation Award for his innovative teaching techniques, which encouraged critical thinking and enhanced the overall learning experience.

A longtime assistant baseball coach at East Lansing High School who took pride in volunteering his time for young people has passed away.

Ed Outslay died Monday after throwing batting practice for the Trojans' varsity team at the high school before a game. He was 67.

Outslay took a break from throwing pitches between 2:30 p.m. and 2:45 p.m. Monday and collapsed, Trojans head coach Mark Pendred said. Pendred administered CPR until paramedics arrived. Paramedics also tried to revive Outslay while he was being transported to a local hospital, where he was pronounced dead. ...

This is Pendred's 24th year as East Lansing's head coach. Outslay had been an unpaid coach under Pendred for 23 of those years. Outslay was so resistant to recognition that he declined to be in team photos every season, Pendred said. "He just wanted to make sure it wasn't about him," Pendred said. "It was never about him. It was about the kids all the time." ...

[Outslay] told the State Journal "there's nothing better" than being out on East Lansing's baseball field at about 8:30 p.m. with the sun going down. "I know I sound like Kevin Costner in 'Field of Dreams' but there's truth to it," Outslay said.

Ed Outslay was an exceptional individual. He was the first academic discussant I ever had. I was a second year PhD student. His first slide contained a picture of a fish, the pickerel, which he said was known to eat its young. He said he try to refrain for eating the young of the profession. He didn't--he gave a wonderful and constructive discussion. Whenever I had questions about taxes with a historic twist to them, Ed was the first person I would ask, and he would never disappoint--He know so much, and was always happy to kindly and gently share what he knew. Ed will be missed.