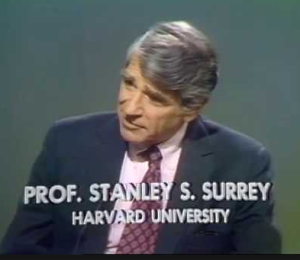 This article examines and assesses Stanley Surrey’s view of the federal tax legislative process. One of the most influential tax professionals of the twentieth century, Surrey is likely best known for his advocacy of specific tax policy ideas. But Surrey saw legislation as the prime route for adoption of most of his ideas, and he thus focused and provided many commentaries on the tax legislative process. He drew on extensive experience with the process, serving two lengthy terms (almost 20 years) in the Treasury Department, and remaining closely involved with it throughout his academic years.

This article shows that Surrey’s faith in expertise and fierce commitment to tax equity and fairness led him to believe that Treasury should play the dominant role in the legislative process.

He never wavered in his belief even after his view was vigorously challenged by members of the Senate during his confirmation hearing to be Assistant Secretary of the Treasury, and even following periods when he perceived the Treasury as not acting in the public’s interest. Treasury dominated the tax legislative process during the early years of the modern income tax but it never reached the same level of influence during Surrey’s lifetime. In fact, the changes in the process that Surrey experienced generally moved it further and further away from his preferred outcome. This article provides evidence that some of Surrey’s experiences with congressional staff during his first term in government played a formative role in his thinking. It also suggests that Surrey favored a top-down approach to the legislative process to ease adoption of Treasury’s views.