WSJ: IRS Payments To Tax Snitches Are Up 900%

Wall Street Journal Tax Report, The Profitable Prospects of Snitching for the IRS:

These are boom times for snitches who turn in tax cheats to Uncle Sam.

The Internal Revenue Service awarded more than $312 million to tipsters last year, according to a little-noticed report released in February [Whistleblower Program Fiscal Year 2018 Annual Report to Congress]. This total far outstrips the previous record of $125 million awarded in 2012. The 2018 rewards, paid in the fiscal year ended Sept. 30, were for additional collected revenue of $1.4 billion, compared with $191 million in fiscal 2017. 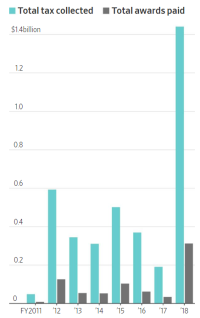 And the agency has already paid $115 million to whistleblowers for 2019, according to lawyers Dean Zerbe, Jeffrey Neiman and Gregory Lynam. They expect more to come. Some recent payouts have been huge. Last year, one tipster was awarded about $100 million, nearly one-third of the total, for turning in a multinational corporation. ...

To date, the largest known IRS whistleblower award of $104 million went to Bradley Birkenfeld, a former private banker for UBS AG who did go public. His 2012 payment was for turning in the Swiss banking giant, which admitted it encouraged U.S. taxpayers to hide assets abroad.

The surge of recent awards shows that a key expansion of the IRS’s whistleblower program is finally taking hold. The change was enacted by Congress in 2006 and pays up to 30% of the revenue collected to tipsters in large cases, those involving more than $2 million of tax. For smaller cases, the payout has typically been a much smaller percentage.

“The large-awards whistleblower program is now hitting on all cylinders,” says Mr. Zerbe, a former aide to Sen. Charles Grassley (R., Iowa), who sponsored the change.