Where In The U.S. Are You Most Likely To Be Audited By The IRS?

ProPublica, Gutting the IRS: Where in The U.S. Are You Most Likely to Be Audited by the IRS?:

Humphreys County, Mississippi, seems like an odd place for the IRS to go hunting for tax cheats. It’s a rural county in the Mississippi Delta known for its catfish farms, and more than a third of its mostly African American residents are below the poverty line. But according to a new study, it is the most heavily audited county in America. 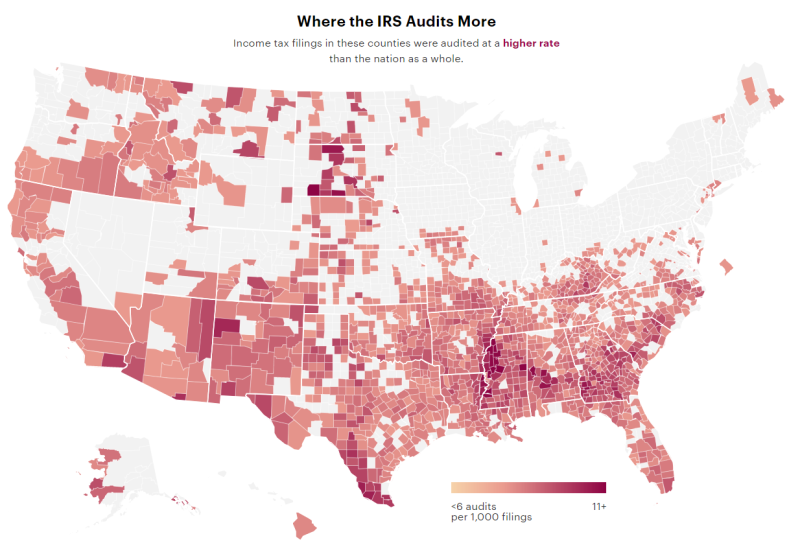 In a baffling twist of logic, the intense IRS focus on Humphreys County is actually because so many of its taxpayers are poor. More than half of the county’s taxpayers claim the earned income tax credit, a program designed to help boost low-income workers out of poverty. As we reported last year, the IRS audits EITC recipients at higher rates than all but the richest Americans, a response to pressure from congressional Republicans to root out incorrect payments of the credit.

The study estimates that Humphreys, with a median annual household income of just $26,000, is audited at a rate 51 percent higher than Loudoun County, Virginia, which boasts a median income of $130,000, the highest in the country.

Kim M. Bloomquist, the author of the study, which was first published in the industry journal Tax Notes, served as a senior economist with the IRS’ research division for two decades. He decided to map the distribution of audits to illustrate the dramatic regional effects of the IRS’ emphasis on EITC audits. Because more than a third of all audits are of EITC recipients, the number of audits in each county is largely a reflection of how many taxpayers there claimed the credit, he found. ...

The map reveals wide variations in the audit rate from place to place, but also how certain groups of Americans are disproportionately affected by the IRS’ policies. The five counties with the highest audit rates are all predominantly African American, rural counties in the Deep South. The audit rate is also very high in South Texas’ largely Hispanic counties and in counties with Native American reservations, such as in South Dakota. Primarily poor, white counties, such as those in eastern Kentucky in Appalachia, also have elevated audit rates.

The states with the lowest audit rates tend to be home to middle income, largely white populations: places like New Hampshire, Wisconsin and Minnesota. Generally, the IRS audits taxpayers with household income between $50,000 and $100,000 the least. 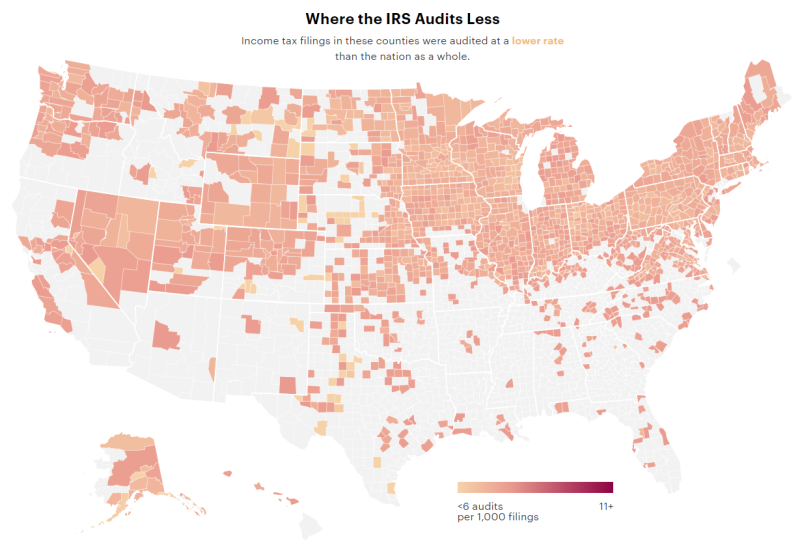 In an email, an IRS spokesperson said that tax returns are selected for audit without regard to race or where the taxpayer lives.

Despite the article's intentional implications to decieve, tax audits have nothing to do with whether a taxpayer is black, Hispanic, or American Indian. It has to do with matching programs of unreported income, non-filers, excessive deductions, and, importantly, uncovering tax fraud claiming improper EITC to get back more than paid in. Suggestions that the audits are race-based is journalistic and academic fraud, and that should be called out rather than the IRS.

You left out the fraud rates among these categories of taxpayers. For more than 20 years the EITC has been a magnet for fraud. One study found a third of these returns were false or fraudulent- and this is not withheld taxes being paid out. It is a form of welfare which Congress forced IRS to administer.