The Death Of An Adjunct ... And The University's Soul 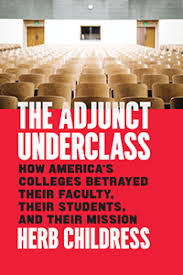 The Atlantic, The Death of an Adjunct:

Thea Hunter was a promising, brilliant scholar. And then she got trapped in academia’s permanent underclass. ...

To be a perennial adjunct professor is to hear the constant tone of higher education’s death knell. The story is well known—the long hours, the heavy workload, the insufficient pay—as academia relies on adjunct professors, non-tenured faculty members, who are often paid pennies on the dollar to do the same work required of their tenured colleagues.

The position is often inaccurately described as akin to a form of slavery. Thea, a scholar of rights, slavery, and freedom, would have been the first to say that is not the case. It is more like the lowest rung in a caste system, the one that underrepresented minorities tend to call home.

“Just as the doors of academe have been opened more widely than heretofore to marginalized groups, the opportunity structure for academic careers has been turned on its head,” a 2016 report on faculty diversity from the TIAA Institute, a nonprofit research center focused in part on higher education, reads. From 1993 to 2013, the percentage of underrepresented minorities in non-tenure-track part-time faculty positions in higher education grew by 230 percent. By contrast, the percentage of underrepresented minorities in full-time tenure-track positions grew by just 30 percent.

Nearly 80 percent of faculty members were tenured or tenure-track in 1969. Now roughly three-quarters of faculty are nontenured. The jobs that are available—as an adjunct, or a visiting professor—rest on shaky foundations, as those who occupy them try to balance work and life, often without benefits. And Thea wobbled for years.

She was on the tenure track, and then she wasn’t. She had a promising job lead, and then it wasn’t so promising. She was on her way to publishing, and then that fizzled. Meanwhile, her hopes and setbacks were compounded by an underlying reality that many adjuncts face: a lack of health insurance. She was a black woman in academia, and she was flying against a current. Some professors soar; adjuncts flap and dive and flap again—until they can’t flap anymore. ...

She had a number of ailments that bothered her—her asthma, her heart—and the rigors of being an adjunct added to them. Had she been tenured, she would have experienced a sort of security that tenure is designed to provide: a campus office of her own, health insurance, authority and respect with which to navigate campus bureaucracy, greater financial stability. Without tenure, she was unprotected, at the whim of her body’s failings, working long hours for little pay, teaching large survey classes outside of her area of special expertise. As Terry McGlynn, a biology professor at California State University at Dominguez Hills, wrote in The Chronicle of Higher Education, “Full professors benefit from the exploitation of non-tenure-track instructors.” Adjuncts often do the work that other professors don’t want.

Thea and Henderson would message back and forth about the toll that work and life had been taking on Thea. “I have been saying I am done, emotionally drained and without reserves. There has just been too much going on in my life that has been drawing upon whatever emotional reserves I have,” she told Henderson in an email. “That plus the constant financial crisis that has been my life for years takes its toll.”

She had been teaching at the City College of New York, where she worked part-time in the black-studies department and part-time in the history department. The course enrollments were too high. She had been providing support to students who were “woefully unprepared” for college, “and I am drained in all sorts of ways because of it,” Thea said in a message to Henderson—and that was just the teaching part. Two deaths occurred back to back. First, Cooper, her companion. Then, a few months later, her mother, Grace.

Thea was changing, her friends said. She began retreating from them. But she was still working, still teaching. She kept more and more to herself, and she especially didn’t say much about her mounting health issues with anyone, friends and family alike.

On December 17, Jim Downs received an anonymous call on his cellphone. He reluctantly answered to hear the voice of a social worker from NewYork-Presbyterian Hospital on the other end of the line. Thea had been brought to the hospital by an ambulance a few hours prior, the social worker told him. She was in intensive care. ...

An emergency-room doctor later explained to Downs what had happened to her. “She had arrived to the hospital out of breath,” Downs recalled the doctor saying. “Her lungs were full of fluid; her body was full of fluid.” The doctors ran tests and her bloodwork showed that she had multi-organ damage. They tried to help facilitate her breathing, but her heart rate began to increase and her blood pressure fluctuated. The doctors put her on a ventilator, but her heart rate spiked until she went into cardiac arrest. The doctors worked on her for 45 minutes and saw signs that she was trying to breathe, but after a while it became too much work for her body to handle. ...

“Thea was exploited by a system that consumes thoughtful, committed academics like our beloved friend, even as it is reluctant to admit it—color compounding the oppression one-hundredfold.” Academia is not an easy road for anyone to take, but especially not for women of color, and especially not for those who have been consigned to the adjunct underclass.

Her friends have memorialized her; now they want to memorialize her work. Thea’s papers are being reviewed by the Schlesinger Library at Harvard, to be included in their collections. She will be a co-author on a forthcoming edited volume from Columbia University Press.

If adjuncts were birds, they would be fighting the drag of the air, exerting bursts of energy again and again and again. Thea’s friends said she admired eagles, delighting in how they soared. But she also admired the scrappy birds that would flap and dive and flap until they just couldn’t flap anymore.

[N]ews of the death of Margaret Mary Vojtko, an adjunct professor of French at Duquesne University, went viral in 2013. The circumstances of her final months painted a jarring picture of how dire a professor’s living conditions could be. Before Vojtko learned her semester-to-semester contract would not be renewed, she was earning less than $25,000 per year for teaching eight courses, without health insurance or retirement benefits, and living on the edge of homelessness. Just as Duquesne told her to clear out her office, she learned from her doctor that she had six months to live, as the cancer she’d been battling got worse. Shortly after losing her job, she suffered cardiac arrest and died in the hospital two weeks later, at age 83. "For a proud professional like Margaret Mary," wrote Vojtko’s lawyer, the termination of her tenuous contract "was the last straw."

Even as obscene tales of adjunct woe lay bare the cruelty of adjunctification, the percentage of contingent faculty members continues to rise. At the time of Vojtko’s death, those working without the possibility of tenure — and in many cases on a course-by-course, semester-to-semester basis, without salary or benefits — made up about two-thirds of all college instructors in America. Today, that figure is closer to three-fourths. Depending on the type of institution, one- to two-thirds of the vast faculty majority working without the prospect of permanent employment can’t count on having a job for more than a year at a time. ...

We need to call a lie a lie. The point of pushing this kind of corrective information at every turn is not to antagonize tenured faculty members and administrators, but to help them — and the wider public — see with clarity the extent to which we are all, together, marching toward the cliff’s edge.

Appeals to empathy and outrage gin up so much hot, concentrated concern — witness the outrage after Vojtko’s death, and the more recent death of Thea Hunter, an adjunct professor of history — but inevitably, like the smallest of stars, such concentrated concern ends up dying a quiet death. We need to fundamentally reconceptualize the battle against adjunctification, shifting away from pity or outrage and toward arguments that universities themselves deny at their own peril.

Herb Childress, The Adjunct Underclass: How America’s Colleges Betrayed Their Faculty, Their Students, and Their Mission (University of Chicago Press 2019):

Class ends. Students pack up and head back to their dorms. The professor, meanwhile, goes to her car . . . to catch a little sleep, and then eat a cheeseburger in her lap before driving across the city to a different university to teach another, wholly different class. All for a paycheck that, once prep and grading are factored in, barely reaches minimum wage.

Welcome to the life of the mind in the gig economy. Over the past few decades, the job of college professor has been utterly transformed—for the worse. America’s colleges and universities were designed to serve students and create knowledge through the teaching, research, and stability that come with the longevity of tenured faculty, but higher education today is dominated by adjuncts. In 1975, only thirty percent of faculty held temporary or part-time positions. By 2011, as universities faced both a decrease in public support and ballooning administrative costs, that number topped fifty percent. Now, some surveys suggest that as many as seventy percent of American professors are working course-to-course, with few benefits, little to no security, and extremely low pay.

In The Adjunct Underclass, Herb Childress draws on his own firsthand experience and that of other adjuncts to tell the story of how higher education reached this sorry state. Pinpointing numerous forces within and beyond higher ed that have driven this shift, he shows us the damage wrought by contingency, not only on the adjunct faculty themselves, but also on students, the permanent faculty and administration, and the nation. How can we say that we value higher education when we treat educators like desperate day laborers?

Measured but passionate, rooted in facts but sure to shock, The Adjunct Underclass reveals the conflicting values, strangled resources, and competing goals that have fundamentally changed our idea of what college should be. This book is a call to arms for anyone who believes that strong colleges are vital to society.

One would think that smart people would understand the classic response to this kind of labor power imbalance is to unionize.
Unemployed N., I never realized you thought Trump was progressive. But I guess a "but they do it too" defense was about as good as you could come up with.

"Shocking how the most progressive institutions in our society (academia, Hollywood, etc.) often display behavior widely opposed to their stated views and public virtue signaling.."

Yes, it's not as if the president's companies have employed hundreds of H2Bs and undocument immigrants before, during, and after his campaign based on anti-immigrant hysteria...

But, Todd, how will they pay for all those administrators if they don't "serf out" the adjuncts.

Curious, are there versions of this story for Hollywood and other such bastions of [censored].

Funny how the adjunctification of the professoriate coincides with the explosion in administrative staff positions in higher education.

You mean all these institutions completely run by proggies are racist and exploitive? Who knew??

"more like the lowest rung in a caste system"
Yes, a caste system that is voluntarily joined, not one that is imposed by immutable characteristics of its members. It's like joining the military ... and coming in at the lowest rank, fully aware that they don't need that many generals or admirals.

Shocking how the most progressive institutions in our society (academia, Hollywood, etc.) often display behavior widely opposed to their stated views and public virtue signaling...

This was a tragedy. Universities need less administrators and more permanent faculty.