The Big Fail: Why Bar Pass Rates Have Sunk To Record Lows 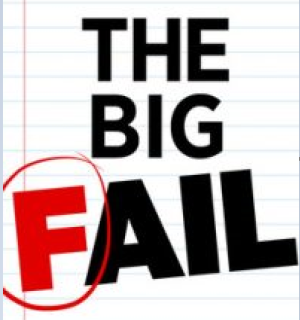 Law.com, The Big Fail: Why Bar Pass Rates Have Sunk to Record Lows:

“From a dean’s standpoint, there is no greater tragedy than someone coming to law school—wanting to practice law—and not passing the bar,” [South Dakota Dean Thomas Geu] said. ...

In the first in a series about the high percentage of law graduates failing the bar and the impact on law schools and the legal profession, Law.com examines how far rates have dropped in recent years and the reasons for the decline.

The falloff has been national in scope. The average score on the Multistate Bar Exam—the multiple choice portion of the test—sank to a 34-year low on the July 2018 administration, according to the National Conference of Bar Examiners. 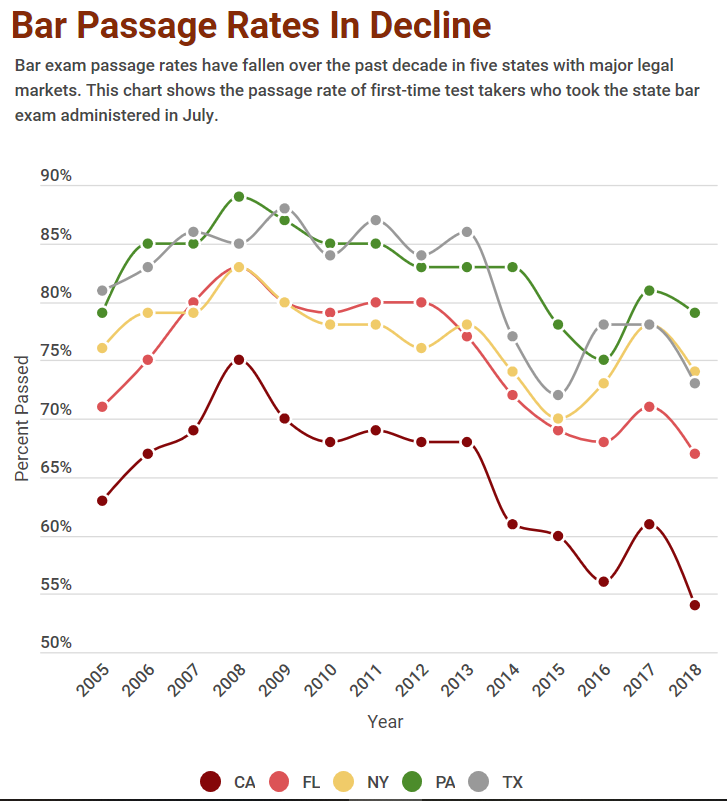 Law.com analyzed the bar pass rates reported by schools to the American Bar Association between 2013 and 2017—the 2018 results aren’t yet available—and found that 42 out of 203 ABA-accredited law schools saw their pass rate fall anywhere from 10 to 20 percent. Thirty-five schools had pass-rate declines of more than 20 percent in those four years.

While their circumstances vary somewhat, most of those schools with pass-rate declines larger than 20 percent have experienced significant drops in their enrollment and applicants, as well as challenges in helping graduates find legal jobs—making for a toxic stew of challenges.

The cause of the decline is multifaceted, but it’s clear that waning demand for a law degree has played a key role. From 2010 to 2016, the national applicant pool shrank 36 percent—in part due to a contraction in the entry-level legal job market and newfound attention on jobless law grads with staggering amounts of student debt. As a result, the falloff in applicants with high LSAT scores was particularly steep.

Because of legal education’s declining popularity, schools have needed to reach deeper into their applicant pools to fill out their classes, or they were forced to reduce the number of new students they enrolled. Many campuses employed a combination of both strategies.

The upshot is that incoming law students on the whole had lower LSAT scores and undergraduate grades than their predecessors—a trend that has only begun to reverse. (The number of law school applicants was up 7 percent last fall, marking the first significant increase in eight years.) 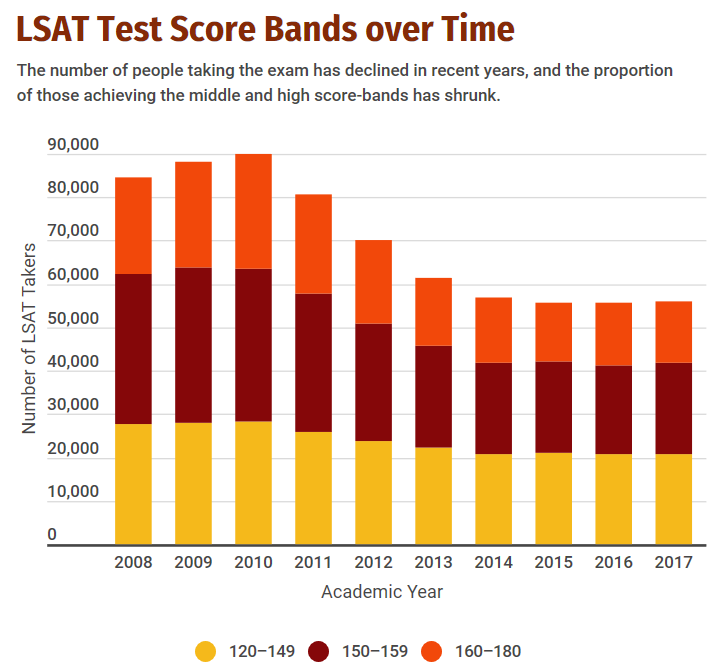 A recent study commissioned by the State Bar of California concluded that the declining credentials of law students account for up to 50 percent of the state’s falling pass rates.

But Kellye Testy, president of the Law School Admission Council, said there’s much more at play. She suspects the falling pass rates are the results of a combination of factors, the most obvious being the lower credentials of incoming students. The declining quality of public education—meaning an erosion of the reading and writing foundations children develop in elementary and high schools—may also be a contributor, she said.

Moreover, the evolving way that law is taught may explain why today’s law graduates are struggling more on the bar exam, said Testy, whose organization develops the LSAT. Professors now put less emphasis on memorizing rules, and have backed off on some of the high-pressure tactics—like the Socratic method—that historically dominated the classroom.

“The way we used to teach wasn’t as good for caring for the student, but it made sure you could take a closed-book exam,” she said. “You knew the doctrine. It was much more like a bar exam, in some ways. Today, when you go into a classroom, it’s all PowerPoint. The teachers give them an outline, the students are on computers. There’s a different student approach and a different faculty approach.”

Perhaps law professors have backed off on memorization is because law schools want to better prepare students for practice. The practice of law isn’t about rote memorization, nor is it a closed book exam. Even though professors incorporate different learning strategies they are not spoon feeding students. Students must still engage with the material to learn, synthesize, and apply it in a high pressure situation. Maybe the way we teach students is one of the reasons they struggle on the bar exam. However, maybe the problem is with the bar exam and not with how we teach.

“From a dean’s standpoint, there is no greater tragedy than someone coming to law school—wanting to practice law—and not passing the bar,” [South Dakota Dean Thomas Geuhe] said. ...

The above-quote is clearly not true. The far greater tragedy, from a dean's perspective, is declining revenue due to decreased enrollment. That is why they don't limit class size to those who can succeed.

The drop of incoming LSATs accounts for only 50% of the drop? Very difficult to believe. Need to see the statistics.

The bar exam, in theory, tests where someone has the knowledge to actually practice law. What I've noticed in the three-plus decades I've been practicing is that law schools are drifting away from the nuts-and-bolts courses necessary to pass the bar exam and therefore practice law. In my interview of potential associates, I've seen an increase in "[Insert Latest Sexy Topic] & the Law" type courses to the detriment of things like Estates & Trusts and Trial Practice.These trendy offerings may help professors get published or obtain tenure, but they don't prepare a student for the bar exam or actually do something in the real, non-Biglaw world.

The dean should instead feel GRATITUDE — to the bar, for preventing the infliction of malpractice upon the public by would-be lawyers who can't pass the exam — and resolve to do his own job better in the future.