Should Startups Choose C Corporation Status After The TCJA? 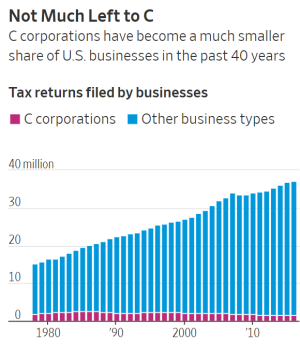 The corporate structure is gaining new attention among companies after changes in the tax law created the potential for big savings.

Some startups are looking for a windfall in tax savings by adopting a corporate structure that until recently made little sense for any but the largest, publicly traded companies.

For John Bisges it was a pretty easy decision. The Georgia businessman is launching a new brewery this year with a corporate structure known as a “C corporation.” It could allow him the best of two worlds: A low 21% corporate tax rate created in President Trump’s 2017 tax law, and a generous capital-gains tax exemption championed by President Obama.

Mr. Bisges is pinning this part of his business plan on Section 1202 of the Internal Revenue Code, an underused provision expanded under Mr. Obama, and one that is gaining new attention after the 2017 Tax Cuts and Jobs Act made it more attractive.

The strategy is particularly advantageous for business founders who expect to start small, keep earnings inside the company, make annual profits and then cash out. If a taxpayer holds C corporation stock for five years and follows the technical rules, capital-gains taxes on a subsequent sale get erased—on gains up to $10 million or 10 times the original investment, whichever is greater. ...

Until 2017, the C corporation structure rarely offered advantages, except for businesses that wanted venture-capital funding or were headed for an initial public offering. ...

Some startups, however, are now choosing C corporation status, with their advisers highlighting the advantages of Section 1202. Business owners can’t be sure, of course, how long Congress will keep the 21% tax rate and that uncertainty is a consideration. ..

The Section 1202 strategy doesn’t work for everyone. Like the new pass-through break, it comes with a list of businesses that aren’t eligible, such as consulting firms and medical practices. When the stock is issued, businesses can’t have gross assets exceeding $50 million. Buyers may ultimately pay less for the company because it can’t be structured as an asset sale where the buyer gets deductions, said Gregg Polsky, a tax law professor at the University of Georgia. “When you put it all together, I just think it’s a scary proposition and you have to advise your client, tell them all the costs,” he said.

The Tax Cuts and Jobs Act (TCJA) has put the question should a business be organized as a pass through entity or as a corporation at center stage. The TCJA eliminated much of the tax disadvantage from using the corporate form, but did Congress go so far that it advantaged corporations relative to pass-through entities? Some prominent commentators say yes. They argue that the federal income tax now encourages individual owners of pass-through businesses to restructure their business as sub-chapter C corporations, and they predict that the TCJA will lead to a cascade of incorporations. The principal driver of the shift to the corporate form is said to be high-bracket owners of successful businesses using their new corporations as “pocket books” through which to invest in and hold portfolio assets that they would otherwise hold on personal account. The benefit is the deferral of the personal tax on such income and hence a reduction in the present value of that tax. This essay, the first of a two-part series, argues that there generally are no tax benefits from converting and investing in portfolio assets through a corporation.

That is because the corporate tax on the invested income more than compensates for the deferral of the individual level tax on that income. The second essay in this series extends the argument to consider other provisions in the tax law that could potentially change that result and argues that any benefits from converting from a pass through entity to a C corporation at present are modest at best.