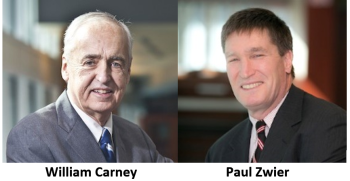 Following up on my previous posts (links below): Daily Report, ABA Asked to Censure Emory for Suspending Law Prof Over Racial Slur:

In defending suspended Emory law professor Paul Zwier, professor emeritus William Carney asked that the university be disciplined after he said the law school and university administrators punished the law professor—and violated his academic freedom—for using a racial epithet in a context that was neither gratuitous nor directed at an individual as a slur.

Carney also included lengthy exhibits with his letter documenting Zwier’s own account of how he used the slur in a torts class while discussing an offensive battery civil case. The professor later used a variation of the slur in a private conversation with a black student, who had called for his resignation, during which Zwier shared that he had been called a “n—-r lover” when he was young because of his parents’ support for civil rights, Carney’s letter said. ...

In calling for Emory to be put on academic probation, Carney noted that, when the law school dean sent an open letter to the Emory law community last August condemning Zwier and later suspended him, “There was no discussion of the context or teaching purpose of the use of the word.” “It is clear that Professor Zwier used the ‘N word’ in a teaching context, discussing how cultural changes have made the use of certain words potentially actionable without physical context,” Carney said.

Carney also cited ABA standards that “vigorously protect” academic freedom in the classroom and AAUP standards that similarly extend First Amendment protections to potentially offensive speech if it is germane to the subject matter being taught.  “Professor Zwier’s use of language falls squarely within that standard,” Carney said.