I teach my tax students that representing a taxpayer is about being the taxpayer’s voice.  They must tell the taxpayer’s story as best they can fit the facts to the law.  Thus, for example, in order to deduct expenses taxpayers must tell a convincing story that the expenses relate to an activity engaged in for profit.  Last week's Lesson concerned taxpayers who said they had converted their former personal residence into income producing property.  The story their representative told was simply too inconsistent with the facts to convince the Court.  Thus they were denied a §165 deduction when they sold the home for a loss. 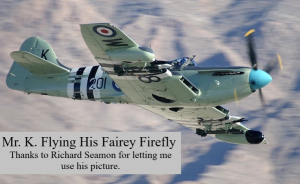 This week’s lesson is similar.  In Edward G. Kurdziel, Jr. v. Commissioner, T.C. Memo 2019-20 (Judge Holmes), the taxpayer bought a plane, restored it, and flew it around the country. That's him flying his plane in the picture.  Here's a video!  What fun!

Oh, and he also took deductions for depreciation and ongoing expenses that far, far, far exceeded income from the plane.  He offset those losses against his hefty airline pilot salary.  The IRS eventually audited and disallowed the losses under the hobby loss rules.  So the taxpayer tried to sell the Tax Court on a story of profit-making activity.  In his usual airy, pun-filled, style, Judge Holmes explained why the taxpayer’s story didn’t fly.  Peter Reilly calls this the coolest hobby loss case ever.  He has a nice summary of the case on his Forbes blog.  What I see in the case is a lesson about storytelling.  One big reason the taxpayer lost here is because he told conflicting stories to different tax authorities.  Telling one story to your local tax authorities and another story to the IRS is, ultimately, not a successful tax reduction strategy.   You are trying to fool one of them.  I thought this was a particularly apropos lesson for today, April 1.  You will find the interesting details, with pictures of the crash (Mr. K was unhurt), below the fold.  If that's not click-bait, I don't know what is.  Who can resist seeing pictures of a crash?

Mr. Kurdziel’s case closely resembles the Langston case from last week in that he, too, was trying to convince the IRS and the Tax Court that he was holding property for the production of income.  In his case, the property in question was an antique WWII fighter plane called the Fairey Firefly.

Mr. Kurdziel, a former Navy pilot, bought one of the few remaining Fireflys in 1993, for $200,000.  It was not operational.  He then spent years and years and “great gobs of money” (Judge Holmes’ words) restoring the plane.  It is not clear how he financed the restoration but he did earn good money as a Delta Airlines Captain and this magazine story implies he was millionaire-rich.  By 2002 he obtained the requisite FAA clearances and started flying the plane in air shows.  Here is a video of him flying the plane.  It was a huge deal in the antique airplane world and Mr. Kurdziel’s plane was featured on the cover of multiple magazines in the ensuring year, and received a long-story treatment in this 2003 article in Air & Space Magazine.

Between 2002 and 2012, Mr. Kurdziel was well known in the airshow circuit, but had to stop in June 2012 when his undercarriage failed while landing at airshow in San Diego.  Fortunately, he was unhurt.  Here are the promised pictures: 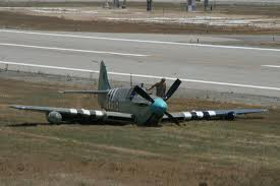 You can see more pictures in this power point presentation about air show accidents and on this flickr page.  According to this hobbyist thread, after touchdown on the main wheels the left main gear gave way.  This caused a swerve to the right and as he went off the runway at which point the right gear also collapsed.

Judge Holmes notes that “the Firefly remained grounded at the time of trial.”  The trial was apparently in 2016, and it is not clear whether Mr. Kurdziel has since restored the plane to working condition.

The tax years at issue are before the crash, 2007-2010.  During that time Mr. Kurdziel reported his airplane activity as a Schedule C airplane leasing business activity.  For three of those years he showed income of $10k, $14k, and $14k; he showed no income for 2010.  For each year he reported net losses of between $117k to $130k.  While most of the losses came from depreciation, even his cash-flow expenses (repairs, insurance, supplies, etc.) exceeded his income from the airplane activity each year by between $45-$50k.  During these years he was also making around $180k as an airline pilot.  Mr. Kurdziel deducted his airplane activity losses against his salary income.

The IRS determined that Mr. Kurdziel’s airplane activity was a hobby.  Accordingly, §183 limited his deductions to the gross income produced by the airplane activity, such as fees and prizes from airshow appearances.

Against this determination Mr. Kurdziel had an uphill battle because he received no help from the §183(d) presumption.  That presumption says that activity which produces a profit in 3 of the 5 years prior to the tax year in question is presumed to be for profit.  Here, Mr. Kurdziel’s airplane activity never turned a profit.  Rather, it steadily produced six-figure losses.  So he was stuck with the usual burden of taxpayers to show why the IRS determination was in error.

Taxpayers can overcome an IRS determination that their activity is a hobby if they tell a convincing story to the Tax Court.  They must show that the facts and circumstances other than their history of losses show the activity was for profit.  Treas. Reg. 1.183-2 structures the facts and circumstances into an indeterminate nine-factor test.  Some courts are not fans of indeterminate multi-factor tests.  Actually, I think it’s mostly just Judge Posner on the 7th Circuit who has been railing against them for years.  For those interested, you can read his screed in Exacto Spring Corp. v. Commissioner, 196 F.3d 833 (7th Cir. 1999).  Judge Posner’s views have not changed since 1999.  Judge Holmes cites to another Posner opinion, this one in 2016: Roberts v. Commissioner, 820 F.3d 247 (7th Cir. 2016).  Personally, I think that indeterminate multi-factor tests, like Democracy, may simply be the worst kind of test except for all the others.  Even as Posner dissed it in the Roberts case---calling it “goofy”---he demonstrated its utility in aiding the Circuit Court’s review.

Similarly, Judge Holmes applies the factors in Kurdziel, doing his usual excellent job in explaining each factor and applying each to the case and why Mr. Kurdziel’s airplane activity was a hobby and not a business.  It is worth reading to see how a capable judge approaches the analysis.  I won’t go through the factors because that’s not the lesson.

The nub of the case is that Mr. Kurdziel’s representative, one Robert J. Gumser of San Diego, was unable to convince Judge Holmes that Mr. Kurdziel held this airplane for production of income.  He tried hard, telling two stories.  Neither worked.

Second, Mr. Gumser argued that Mr. K. had bought the plane and restored it with the intention of making money from its eventual appreciation.  This echoes the argument made by the Langstons in last week’s post.  The story here was that flying the plane at airshows and gaining notoriety was his method of increasing its fair market value.  Good story!  Mr. Gumser even introduced experts who testified that the Firefly had been worth between $3.5 and $8 million dollars while it was in flying condition, far more than the $2 million it appears Mr. K. put into restoring the plane.  Those were great facts to get before the Court.

Unfortunately, Mr. Gumser’s story was undone by what his client had previously told the local property tax authorities in San Diego.  Mr. Kurdziel had not wanted to pay personal property tax on the Firefly and so he filed for a property tax exemption.  To get that exemption, Judge Holmes explains, “he asserted [in public filings] that he was neither using the Firefly for commercial purposes nor holding it for sale.”  Whoops.  That really bad fact played an important role in Judge Holmes’ evaluation of several of the nine factors.  As it should.

Sometimes we tell inconsistent stories to ourselves about what we do and why we do it.  That is human nature.  But taxpayers need to keep what they tell one taxing authority consistent with what they tell another.  Otherwise, they may get whipsawed the other way, such as if the San Diego property assessors office now revokes Mr. Kurdziel's property tax exemption.  You can be of great service to your clients by helping them understand they will ultimately do better if they keep their story straight.

@Lewis: You Marxist you!