Infanti: How U.S. Tax Laws Discriminate Against Women, Gays And People of Color 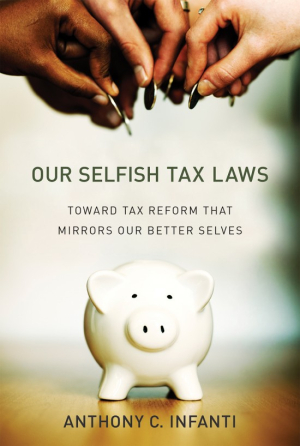 What and how a country chooses to tax says a lot about its values.

A core value built into the DNA of America, for example, is equality. And in practice, Americans imagine their country to be more equal than it is and strive to treat every member of society that way.

But, as I learned in researching my book, Our Selfish Tax Laws: Toward Tax Reform That Mirrors Our Better Selves (MIT Press 2018), America’s tax laws paint a different picture.

Instead of reflecting a society constantly striving to better itself, U.S. tax laws are mired in the past. They reinforce the social and economic marginalization of women, racial and ethnic minorities, the poor, members of the LGBTQ community, immigrants and people with disabilities.

For instance, U.S. tax law has chosen marriage as the defining characteristic of all individuals when deciding how income tax returns should be filed. That is, most Americans file their 1040s either as “single” individuals or as “married filing jointly.” But even when taxpayers in these two groups have equal incomes, they aren’t necessarily treated equally.

Among married couples, our tax laws give preferential treatment to those whose marriages comport with “tradition” – that is, with one spouse working in the labor market and the other in the home. These couples are rewarded because they pay less tax than if they earned the same amount but hadn’t married.

In contrast, those in “modern” marriages – with each spouse working outside the home – often suffer marriage penalties. These couples pay more tax than if they earned the same amount but hadn’t married. ...

The tax treatment of employment discrimination awards is another example. ...

These are but two examples among many of how U.S. tax laws present a distorted picture of what Americans value and the type of society that America aspires to be.

So when politicians talk about “tax reform,” much more is at stake than retaining political power or doling out tax cuts. True tax reform takes time and should entail discussions among the electorate and with politicians regarding the role that the tax laws play in exacerbating social and economic inequality.

That way, Americans can build a tax system that helps create a more just society rather than one that just rewards privilege.

Stop promoting the nuclear family with tax laws. Who cares if it has been the central stabilizing force in all civilizations for all time?

"A core value built into the DNA of America, for example, is equality."

Ironic, given that the U.S. has the most progressive federal income tax system in the entire OECD.

But I'm all for tax equality. Unfortunately, I don't see this op-ed arguing for a flat tax rate with no deductions or exemptions, which would be treating everyone's income equally.

It isn't the laws that discriminate, it's the abnormal (not in a pejorative sense, but in the fact that it isn't the statistical norm) behaviors of the cohorts, that lead to different outcomes. Same explanation as the fictitious "wage-gap" that is a function of the types of jobs and the number of hours worked, rather than any overt discrimination.