After cratering to all-time record lows last year, scores on the February administration of the Multistate Bar Exam have bounced back. It’s good news, but modest—the rise returns to scores from February 2017, which were at that time the lowest in history. Scores have now bounced back to match the second-lowest total in history… which is slightly better. 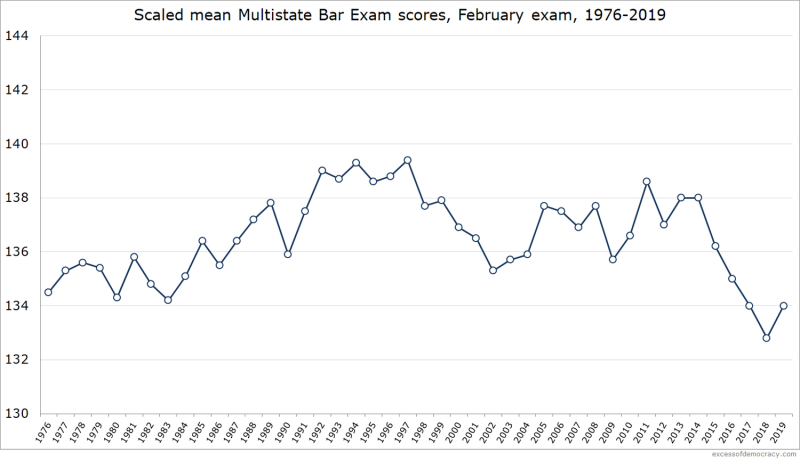 Things may finally be looking up for February bar takers.

The national average score on the Multistate Bar Exam—the multiple-choice portion of the test—increased by 1.2 points to 134 for the February 2019 test, according to the National Conference of Bar Examiners. That represents the first increase in the mean February MBE score since 2013, which was followed by a five-year slide in bar exam pass rates. ...

It’s uncertain whether the increase in the February average MBE marks the start of a sustained recovery in pass rates. Many legal educators hoped that a higher average MBE on the July 2016 and 2017 bar exams meant that pass rates were recovering, but the average MBE sank to a historic low the following year.

Derek Muller, a professor at Pepperdine University School of Law who tracks bar exam trends on his Excess of Democracy blog, said that the uptick in February’s average MBE score could correlate to the large number of people who failed the bar in July if there were many people who just barely missed the cut then. “It might simply have been some bad luck from test-takers [in July], and there were more near-fails than previous years,” he said. “So that cohort looked stronger this February 2019.”