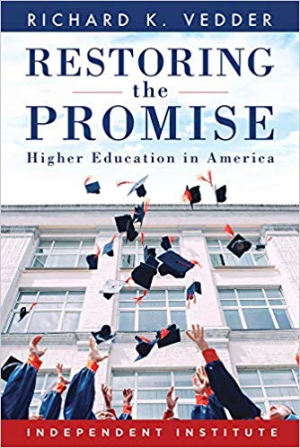 I assign far less reading, demand less writing, and give higher grades than I did two generations ago.

One reason college is so costly and so little real learning occurs is that collegiate resources are vastly underused. Students don’t study much, professors teach little, few people read most of the obscure papers the professors write, and even the buildings are empty most of the time.

The New York Federal Reserve says more than 40% of recent college graduates are “underemployed,” but many already are while in school. Surveys of student work habits find that the average amount of time spent in class and otherwise studying is about 27 hours a week. The typical student takes classes only 32 weeks a year, so he spends fewer than 900 hours annually on academics—less time than a typical eighth-grader, and perhaps half the time their parents work to help finance college.

It wasn’t always this way. As economists Philip Babcock and Mindy Marks have demonstrated, students in the middle of the 20th century spent nearly 50% more time—around 40 hours weekly—studying. They now lack incentives to work very hard, since the average grade today—a B or B-plus—is much higher than in 1960 when the average grade-point average of around 2.5 implied a typical grade of B-minus or C-plus.

I’m part of the problem: I’ve been teaching for 55 years, and I assign far less reading, demand less writing, and give higher grades than I did two generations ago. ...

To be sure, there are many exceptions. On some campuses, students study much more. Engineering majors probably work much harder than communications or gender-studies majors. And there are professors who are in their offices more than a few hours a week. Students in law and medical schools often work very long hours. Many hard-science researchers spend much time in their labs.

Still, Time Use Survey data from the Labor Department suggest that students spend more time on recreation and partying than on academics, and most professors are not often found during daytime hours in the office, classroom, laboratory or the library. Where are they? What are they doing? Why can’t students and faculty show the same work ethic that made our market-disciplined nation the wealthiest place in history?

This is nonsense. College is vastly harder to get into than it was a few decades ago. And academics have vastly higher credentials than do most journalists. This is letting off steam, not scholarship.

All educational researchers say that learning is effortful. If you don't put in the work, you won't learn. Students may be happy with their (inflated) grades, but these students are setting themselves up for failure once they graduate. High grades may get you a job, but what you know and what you can do helps you keep that job and move up. There is no substitute for hard work.

One cannot really assess selectivity without taking into account today's re-normed standardized tests and super-scoring. Otherwise we are comparing apples to grapes.

It's worth noting that many students can't devote as much time to school because they are too busy working during the school year to help finance their vastly-inflated tuition costs.

As it's worth noting that Vedder has spent most of his career doing variants of this "Kids these days" shtick.