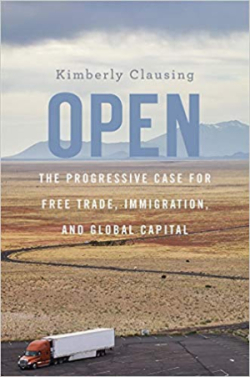 On inauguration day, Trump promised the American people he would put “America first.” This rhetoric has provided verbal backing for new trade restrictions, immigration reductions and the withdrawal of the United States from prior international agreements and commitments.

As I argue in my new book, “Open: The Progressive Case for Free Trade, Immigration, and Global Capital,” these new trade barriers and immigration restrictions are more likely to harm than help American workers.

Tariffs are regressive consumption taxes, and trade wars generate new disruptions that hurt American workers and industries, including soybean farmers with unsold crops as well as autoworkers facing plant shutdowns resulting in part from higher costs due to steel tariffs in the United States.

But policymakers looking for a better way to put “America first” might usefully start with the tax code. The 2017 tax legislation known as the Tax Cuts and Jobs Act has many provisions that are in desperate need of improvement. ...

My new book, Open, makes the argument that there are progressive ways to respond to the challenges of the global economy and better tax policy is a key part of that response.

But, unfortunately, the Tax Cuts and Jobs Act is a regressive response to the challenges posed by today’s global economy. Not only do the vast majority of the tax benefits from the legislation accrue to those at the topof the income distribution, but the legislation weakens the health security of ordinary Americans.

Reduced spending on health insurance subsidies for poor Americans will increase the number of uninsured Americans and generate more expensive premiums for those that remain insured.

Beyond these factors, the $1.5 trillion in deficits caused by the legislation in its first 10 years are likely to make the fiscal response to the next recession more timid, harming American households. A true “America First” tax policy would look very different.

Tell that to the people who lost their jobs in the past two decades.

"Likewise, immigration restrictions harm American workers and our larger economy. We lose talent, innovation and entrepreneurship; we will have fewer Nobel prizes, fewer workers with desperately needed technological skills and fewer billion-dollar startups."
I doubt many Nobel prize winners are sneaking across our southern borders. But those people that are do harm American workers, particularly those of more blue-collar persuasion than the people you likely associate with. Nothing wrong with allowing targeted legal immigration; but then, that isn't what the immigration debate is about now, is it?