Clarence Thomas Tells Pepperdine Law Audience: 'When You Start The Day On Your Knees, You Approach Your Job Differently' 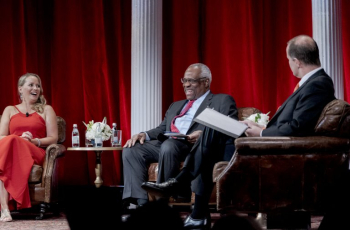 National Law Journal, Clarence Thomas Underscores He Has No Plans to Retire:

U.S. Supreme Court Justice Clarence Thomas was adamant on March 30 when he told a friendly Pepperdine University School of Law audience that he had no plans to retire from the court.

News reports after the event reported that the 70-year-old Thomas said he was not retiring anytime soon, quashing rumors that he planned to do so during the term of President Donald Trump. ...

[Pepperdine president-elect] Gash asked him about the statement made in 2017 by Sen. Dianne Feinstein, D-California, during the confirmation hearing for Amy Coney Barrett for a seat on the U.S. Court of Appeals for the Seventh Circuit: “The dogma lives loudly within you, and that is a concern.”

Thomas quickly replied, “I thought we got away from religious tests.” He said he followed Justice Antonin Scalia’s admonition that personal views had no role to play in judging. But he said that religion plays a positive role in the sense that when he took his oath to follow the law, he made an oath to God as well. “It enhances your view of the oath,” Thomas said.

Thomas added that the oath was a reminder that “you are not God,” a valuable thing to remember in Washington, which he said is a “dangerous place.” Inside the Supreme Court itself, he said, “If you don’t have faith or humility, your ego can expand quickly. It is a dangerous place.”

The justice, who told the audience that he ran away from the Catholic Church in 1968 but “crawled back in 1993,” said he starts his workdays by attending church. “When you start the day on your knees, you approach your job differently,” he said. “It’s hard to feel you are superior.”

Jimb: "Most people fail to discern the religious fervor of the left..." and "I note the slavish bloc voting of the “liberal” Justices over the years."

It seems to me one could make the same statements, with possibly even more truth, about the Right.

Justice Thomas is and has been an outstanding Supreme Court justice. However, given that RBG clearly intends to rule while on a respirator and ultimately die on the bench, it behooves Justice Thomas to retire this term in order to insure that a young conservative justice can be appointed. His entire life's work can be undone if replaced by a Democrat majority. Justice Thomas - please take the long view.

Religion has many aspects. Most people fail to discern the religious fervor of the left, and the lose adherence of its devotees to what is PC at a particular time. I note the slavish bloc voting of the “liberal” Justices over the years.

I agree. This country made a big mistake when it named some courts "supreme." That goes to the head of some. A term like "last court of appeals" might be more appropriate. That'd make it like those gas stations in desert areas that have signs, "Last gas for 80 miles."