WSJ: The Trouble With Taxing Wealth

Elizabeth Warren’s proposed tax on net worth seems like a nearly surgical strike at inequality, but it may not be efficient.

Around the world, governments in recent decades have sought to lighten the burden on capital by reducing taxes on dividends, capital gains, corporate profits and wealth. The motivation is straightforward: more capital means more investment, higher productivity and faster growing wages. Capital is also highly mobile: Tax it too much, and it will go elsewhere, undermining growth.

Massachusetts senator and Democratic presidential contender Elizabeth Warren has broken with that consensus by proposing a tax of 2% on net worth above $50 million and 3% above $1 billion. It may never be enacted; yet in spirit it marks a historic pivot in the focus of capital taxation, from growth to inequality.

While there is no “right” level of inequality, it stands near historic highs and Democrats are unified in wanting to reduce it. Taxing wealth is an immensely appealing, nearly surgical strike at its most glaring manifestation. Yet it may not be an efficient response.

Income consists of money received each year in the form of wages, benefits, interest, dividends, capital gains and government transfers. Wealth consists of income you’ve saved over your lifetime or inherited, then invested in assets such as cash, bonds, stocks, property and stakes in a business, minus debts.

Wealth has always been more skewed than income and the imbalance has grown since the financial crisis. The median U.S. family’s income, adjusted for inflation, fell 4% between 2007 and 2016, while its wealth plummeted 20%, according to Federal Reserve figures. For the richest 10% of families, median income rose 9% while wealth leapt 27%. More than 80% of American households had less wealth in 2016 than on the eve of the last recession, in great part because their homes, the principal asset for most families, were below their precrisis values whereas stocks, whose ownership is concentrated among the rich, have roughly doubled since 2007. 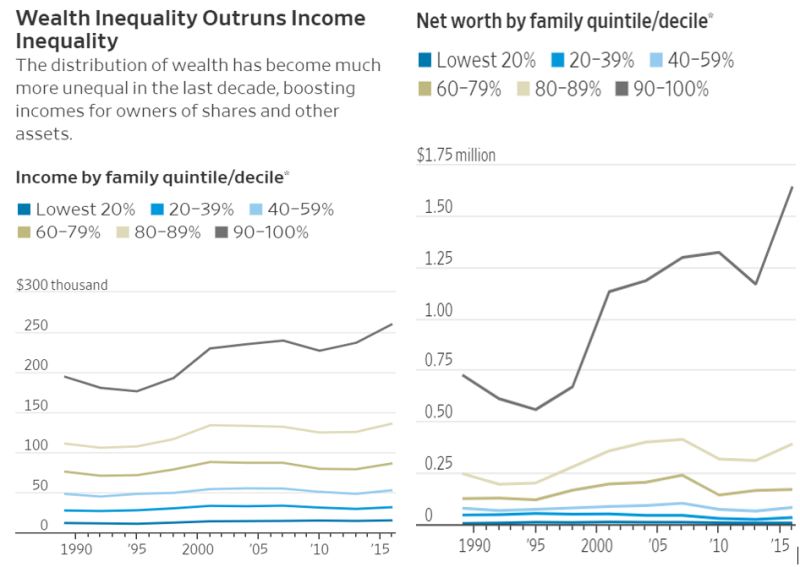 Two broader economic forces have accentuated the trend: low interest rates, which boost property and stock prices; and unusually high profits. Treasury estimates that 52% of all investment income this year will flow to the richest 1% of families by income. The richest 0.1% of families are expected to earn nearly $1.5 trillion, of which 60% will be from investments.

This poses a number of challenges. For the middle class, stagnant wealth limits their ability to buy a home, pay for college or respond to a financial emergency. Wealth imbalances may also undercut economic growth because assets, which typically rise in response to interest rate cuts, are concentrated among people who are less inclined to spend.

For policy makers who want to tax the rich more, this limits the reach of income and consumption taxes. Shielding capital income leaves a big chunk of the richest families’ incomes untouched by taxes, says Greg Leiserson, director of tax policy at the Washington Center for Equitable Growth, a left-of-center think tank.

Of course all of this nonsense is DOA in Congress but that won't stop it. We have leftist ideologues that are desperate to obtain political power by lying to the undereducated masses about how wonderful it will be when they steal from the rich and give to them. Mao, Lenin, and Castro would be proud.

To "Inefficient how?": My heart is with you, but my head says you must be kidding. Wage taxes are extremely efficient: deducted from employee paychecks, delivered to the Treasury, reported to the IRS. Wealth taxes, if ever enacted, share none of these features. They'd be subject to huge rates of evasion, and would take likely take years of litigation to collect. They're a good idea in theory, but..

I'm still waiting for the explanation of how ultra-high net-worth wealth taxes are "less efficient" than wage taxes.

Oh, heck; I'm all for forcing the billionaires whose riches are tied up in their ownership (and control) of the largest public corporations in the United States and sell them off, 2% at a time, to the Chinese in order to pay their taxes. /sarcasm