Hamilton And The Oxford Comma 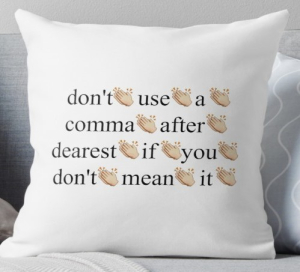 Ending a case that electrified punctuation pedants, grammar goons and comma connoisseurs, Oakhurst Dairy settled an overtime dispute with its drivers that hinged entirely on the lack of an Oxford comma in state law.

The dairy company in Portland, Me., agreed to pay $5 million to the drivers, according to court documents filed on Thursday.

The relatively small-scale dispute gained international notoriety last year when the United States Court of Appeals for the First Circuit ruled that the missing comma created enough uncertainty to side with the drivers, granting those who love the Oxford comma a chance to run a victory lap across the internet.

But the resolution means there will be no ruling from the land’s highest courts on whether the Oxford comma — the often-skipped second comma in a series like “A, B, and C” — is an unnecessary nuisance or a sacred defender of clarity, as its fans and detractors endlessly debate. (In most cases, The Times stylebook discourages the serial comma, often called the Oxford comma because it was traditionally used by the Oxford University Press.)

Angelica Skyler to Alexander Hamilton:
In a letter I received from you two weeks ago
I noticed a comma in the middle of a phrase
It changed the meaning. Did you intend this?
One stroke and you’ve consumed my waking days
It says: “My dearest Angelica”
With a comma after “dearest.” You’ve written
“My dearest, Angelica.”

Quote: ... is an unnecessary nuisance or a sacred defender of clarity

I side with neither Oxford nor the Times. My POV might be called the Laissez-faire Comma. When necessary for clarity, always use the comma, as this lawsuit illustrates. When not necessary, it literally doesn't matter. If there are two lists in the same paragraph, neither needing that added comma for clarity, then it's perfectly acceptable for one to use it and the other to not.

Advantages:
1. Most readers don't notice the distinction anyway.
2. For writers, editors and proofreaders, much time is saved. They need only read looking for situations where the comma is needed for clarity. When that's not the case, no time is wasted making changes one way or the other.

In short, life is too short to be wasted fretting about commas.