NY Times: Is The Upper Middle Class More Similar To The Top 1% Or The Working Class?

New York Times op-ed:  How the Upper Middle Class Is Really Doing: Is It More Similar to the Top 1 percent or the Working Class?, by David Leonhardt:

Is today’s upper middle class — that is, high-earning professionals who don’t tend to have major wealth — more similar to the truly wealthy or to the actual middle class? That question has been the subject of a big debate in recent years.

On one side are writers like Richard Reeves and my colleague David Brooks, who argue that the upper middle class is flourishing. On the other side are people like the economist Thomas Piketty and Senator Bernie Sanders, who say that the important divide is instead between the 1 percent and everyone else. 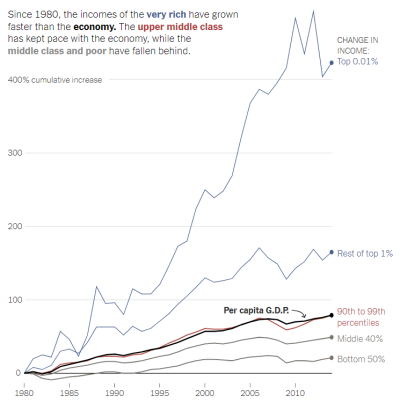 The only real winners in today’s economy are at the very top, according to this side of the debate. When Bernie Sanders talks about “the greed of billionaires” or Thomas Piketty writes about capital accumulation, they are making a version of this case.

@Russ, is that you Econtalker?

This whole issue is a lesson in the poor skills of social justice loons to actually understand what the data tells them...mostly because they are not working in the real world. Income disparity and rapid growth of the top is a direct outcome of the information revolution. A highly competent worker that utilizes the vast information and connectivity available today, produces 2x, 3x, even 5x or more in a working hour then someone 20 years ago. Hence their salaries are higher. Someone who works in jobs that dont benefit from the information revolution is essentially stagnant. This imbalance isnt unfair, or parasitic, just a function of change, no different then the effects of the industrial revolution.

After relooking at this chart, it is fairly useless to make the point that they are making. Comparing cumulative income increases and then saying they are or are not keeping up with the economy by comparing it to per capita GDP is nonsense. Apples and oranges.

From personal experience, speaking as professional who is typically in the top 3-5% depending on the year, UMC is middle class, with nicer toys and able to remove children from marxist indoctrination institutions known as "public school". Redistributive tax policy makes it extremely difficult to accumulate significant capital unless income in the 1%. As you progress up the income hierarchy, removal of tax credits and progressive tax rates really flatten out the life experience in the US. Very frustrating.

When I was 20 I was in the bottom 50%. Now I would be in a top 3% line on the chart. People move up. The graph does not show income mobility as people gain education & experience.

I'd qualify that. If you are upper-middle class and working for the federal government either as an employee or a consultant, you're doing quite well. That's why some three-quarters of the wealthiest counties in the country are in a belt around D.C.

But if you're in a profession that's traditional paid well, perhaps law or medicine, you're in trouble. Law is glutted with lawyers. Medicine is fighting a desperate battle with insurance companies and federal mandates that make good care difficult.

And that's disturbing. We need capable people in law and medicine. Our lives depend on them. I fail to see why we need yet more highly paid federal officials meddling in our lives.

How does the chart look if you start it in 2006? How about a 30 year period and start it in 1988? No coincidence that 1980 is chosen (the year inflation begins to die and we start a nearly four decade rally in financial assets, highlighting the wealth effect. Someone who handpicks the single best year to highlight their point is a polemicist, not an economist.

Also note "income" generally doesn't capture rising home values, which is the biggest asset of the middle and upper Middle classes. So this data captures income from stocks and bonds but not homes. Overall - a completely biased and useless chart.