Gallup's 'Single Most Profound Finding In Its History': 70% Of An Organization's Success Depends On The Quality Of Its Managers 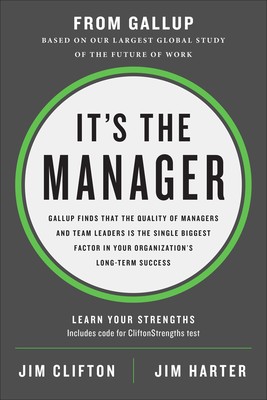 Five years ago, the Gallup organization embarked on one of the most ambitious deep dives it has ever conducted; an analysis of the future of work based on a decade of input from nearly 2 million employees and more than 300,000 business units. The results confirmed something Gallup had seen before: a company’s productivity depends, to a high degree, on the quality of its managers.

What no one saw coming, however, was the sheer size of that correlation—something Gallup calls “the single most profound, distinct and clarifying finding” in its 80-year history. The study showed that managers didn’t just influence the results their teams achieved, they explained a full 70% of the variance. In other words, if it’s a superior team you’re after, hiring the right manager is nearly three-fourths of the battle. ...

The study’s conclusions, laid out in Gallup’s forthcoming book, It’s the Manager, struck a particular chord with me. I, too, had exhaustively studied teams—although my subjects were the top dynasties in sports. I’d reached a similar conclusion: The overwhelming driver for sustained excellence in sports was another kind of middle manager, the team captain.

Gallup’s favorite metric for rating business teams is “engagement,” or a belief among employees that they’re doing meaningful work in a climate that supports personal growth and development. Gallup and others have shown, over many years, that highly engaged teams have significantly lower turnover and higher productivity and profitability, among other things.

Roughly a third of employees in the U.S. are highly engaged, Gallup found, but inside successful businesses that figure can run north of 68%. It’s not surprising that many companies have started measuring internal engagement and tinkering with new perks and initiatives to juice their scores.

Gallup’s deep dive reconfirmed all of this, but it also pointed to something many companies don’t fully appreciate: why engagement is so important.

In previous decades, when Gallup asked people to order their priorities, they ranked family, having children, owning a home and living in peace above having a good job. Starting in 2002, around the time millions of people started comparing their lives on social media, the order shifted. Today, Gallup found, having a rewarding job ranks first.

This finding, which Gallup’s Mr. Clifton calls “seismic,” suggests that some portion of the vast number of people who feel disengaged at work experience an inspiration gap. While many jobs haven’t changed, the expectations we bring to them have metastasized. The wider that chasm becomes, the unhappier we are. ...

One highly questionable tradition is the persistent urge to promote superstars into management roles. A growing body of evidence suggests there’s a weak correlation between an employee’s isolated talent and their leadership ability, and that quiet, selfless, middling performers often would be better choices. Gallup advises companies to seek out managers who infect their teams with a sense of purpose and function more like “coaches” than conventional top-down bosses.

Which also means that when organizations decide to get rid of "poor performers" the real problem may not be within the rank-and-file, but with their managers.