For The First Time In Recorded Weather History (132 Years), The Temperature Never Reached 70 Degrees In February In L.A. 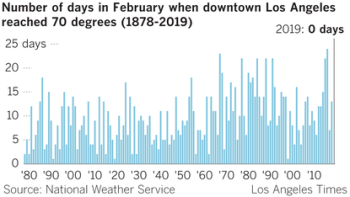 Following up on my previous post, Snow in Malibu:  L.A. Times, A February to Remembrrr in L.A.: It Never Even Reached 70 Degrees:

For the first time since forecasters began recording data — at least 132 years — the mercury did not reach 70 degrees in downtown Los Angeles for the entire month of February.

The average high for the month was 61 degrees, significantly lower than the historical average of 68 for February. That makes it the eighth-coldest February on record, said Ryan Kittell, a meteorologist with the National Weather Service in Oxnard. ...

It’s a big change for Southern California, where temperatures having been rising to record levels in recent years along with a prolonged drought. Weather experts said the chilly February doesn’t signal a larger change in some of those trends.

Even factoring in the cold snap, California is still warmer than average, and swings between periods of severe winter rainstorms and profound drought will probably become more pronounced in the future because of climate change, said Daniel Swain, a climate scientist at UCLA.

He added that it might not be as cold as locals perceive it to be given how much warmer it has been in the last several years. “This year seems anomalous because we have already internalized a lot of the warming that’s occurred,” he said.

This is a meaningless observation, even if it were true. The manipulation of temperature records makes its truthfulness suspect as well.

This is a meteorological First World Problem. It's a California humblebrag.

If you look at the raw data, rather than the "adjusted", where they tweaked temperatures lower in the past, I don't believe the "warming" is outside the range of probable error.