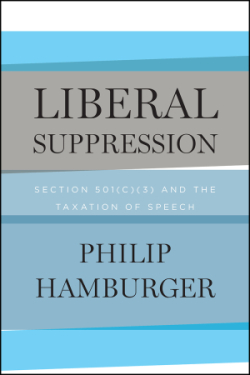 Philip Hamburger’s Liberal Suppression: Section 501(c)(3) and the Taxation of Speech opposes on constitutional grounds the limitation on lobbying and the prohibition of campaign intervention required of charities, including churches, exempt under the Internal Revenue Code. The book is erudite, thoughtful, and thought-provoking. I learned a great deal from it. I also share a number of the author’s concerns. As a tax professor, naturally enough, I see these issues primarily through a tax lens, and this context leads me to draw conclusions regarding section 501(c)(3) quite different from those Hamburger comes to as a constitutional scholar. Yet I also believe that establishing a common understanding of the provision’s place in the Internal Revenue Code is crucial to any critique of it.

Language from Regan v Taxation with Representation (TWR), the 1983 case to which the book often refers, helps frame the contrast between our points of view. Against constitutional challenge, the Supreme Court in TWR upheld the limitation on substantial lobbying for entities exempt under section 501(c)(3) against constitutional challenge. Professor Hamburger’s book, my earlier work, and that of others have extended its reasoning, in particular its reliance on the principle that Congress has no duty to subsidize political activity, to section 501(c)(3)’s prohibition on campaign intervention as well. ...

Unlike Hamburger, my response is not to eliminate the current restrictions applicable to section 501(c)(3) organizations. As I have explained elsewhere, I believe that, as a matter of policy, there are benefits from the current rules and dangers in changing in them. The Johnson amendment has permitted section 501(c)(3) organizations to serve as a nonpartisan sanctuary in our increasingly partisan world. As a result, these groups continue to garner enormous respect from the public. A weakened Johnson amendment would give rise to faux charities, disguised political action committees, formed in order to receive deductible contributions. Their existence would undermine both public trust of charities and our campaign finance regime. For all these reasons, thousands of religious leaders oppose any undermining of the Johnson amendment.

For both constitutional and policy reasons, my solution to the dilemma would be to offer all donors to section 501(c)(3) organizations the subsidy of the charitable contribution deduction. That is, I join those calling for making the charitable contribution deduction (or better yet, a credit) “above the line” so that non-itemizers, including donors to churches, can benefit from it. One calculation estimates that an above-the-line deduction would increase charitable giving by $21.5 billion. Such an approach would not only respond to many of Professor Hamburger’s concerns and recognize charitable giving at all economic levels but would also preserve the benefits of the current version of section 501(c)(3).