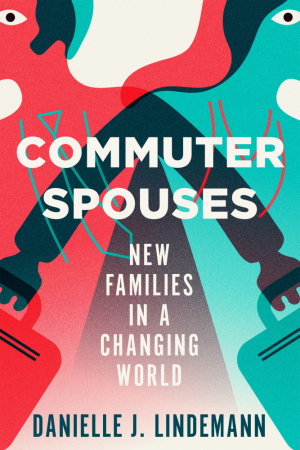 Many academics have partners who are academics, and "two-body issues" complicate many a job search. A new book looks at the impact of these situations on the couples and on society. While many of the couples examined in Commuter Spouses: New Families in a Changing World (Cornell University Press Mar. 15, 2019) are academics, the book explores the issues that arise for others as well.

Danielle Lindemann, assistant professor of sociology at Lehigh University, wrote the book based not only on her research but on her personal experience. She responded via email to questions about the book.

Q: Your author ID says of you, your husband and your "feisty preschooler" that "Currently they all live together." As you note in the acknowledgments, this is a subject you know from personal experience. What has your experience as a "commuter spouse" been like?

A: I lived apart from my husband (part of the time) from 2011 to 2013 while I was doing a postdoc at Vanderbilt in Nashville and he remained in New York. We’re actually not a great case study of commuter marriage, because in many ways we had an ideal setup. We knew we were doing it for a finite period, we were childless at the time, it was a research-oriented postdoc, so there was a lot I could do remotely, and we’re also incredibly privileged in a lot of ways. If you changed just one of those variables, it probably would have been a lot less tolerable. As it was, by the end of the two years, I was more than ready to be done with the commuting. In that last respect, I was similar to the people I interviewed for the book. Most people could find at least one thing they liked about the arrangement, but almost nobody was saying, “This my ideal setup and I want to do it forever.” Everyone I interviewed, except for one person, was either back living with their partners at the time I spoke with them, or planned on resuming cohabitation in the future.

Q: Many academic jobs are in small college towns. How does this influence the academic couple in a commuter relationship?

A: I’m far from the first to observe that the geographic dispersal of academic jobs worked OK when academics were primarily breadwinning men with stay-at-home wives (or with wives whose occupations were secondary to theirs). Now, with the increasing democratization of gender roles in marriage, and women’s investment in their education and careers, that model is bursting at the seams. The “two-body” problem is a real issue for academics, as I’m sure we’re all aware. And it’s not just dual academic couples who struggle, but also academics who are married to folks in other fields.

Because we tend to pair with people who are “like us” demographically, academics are often married to other highly educated professionals in specialized careers. These partners, many times, also can’t just go anywhere to work in the types of jobs for which they’ve been trained. It’s a privileged problem, yes, but it seems that sometimes our high levels of education crystallize in a level of specialization that actually limits our universe of job choices (as we perceive it), rather than widening that pool. It’s a paradox. On the other hand, it’ll be interesting to see how technological advances and the possibilities for remote work (including online classes for academics) impact that dynamic in the future. ...

Q: Your book touches on the subject of "trailing spouses," a term frequently disliked by people who have that label. Should colleges do more to hire the spouses of faculty members?

A: I personally think that, yes, in situations where it makes sense, colleges should be much more amenable to this. Like I said before, the structure of the family is no longer consistent with the structure of academic work. Something needs to give, or the pipeline is basically a sieve, and we’re going to lose a lot of qualified people who otherwise could be making real contributions. There’s clearly the fear that these spouses won’t be as qualified as faculty hired through regular processes, but as I discuss in the book’s conclusion, there is research suggesting that this fear is unfounded.