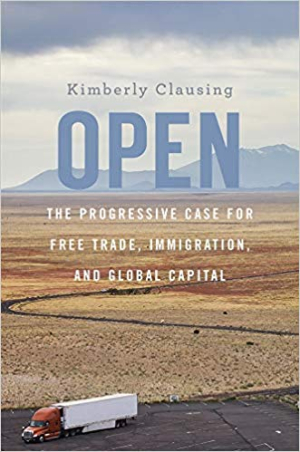 With the winds of trade war blowing as they have not done in decades, and Left and Right flirting with protectionism, a leading economist forcefully shows how a free and open economy is still the best way to advance the interests of working Americans.

Globalization has a bad name. Critics on the left have long attacked it for exploiting the poor and undermining labor. Today, the Right challenges globalization for tilting the field against advanced economies. Kimberly Clausing faces down the critics from both sides, demonstrating in this vivid and compelling account that open economies are a force for good, not least in helping the most vulnerable.

A leading authority on corporate taxation and an advocate of a more equal economy, Clausing agrees that Americans, especially those with middle and lower incomes, face stark economic challenges. But these problems do not require us to retreat from the global economy. On the contrary, she shows, an open economy overwhelmingly helps. International trade makes countries richer, raises living standards, benefits consumers, and brings nations together. Global capital mobility helps both borrowers and lenders. International business improves efficiency and fosters innovation. And immigration remains one of America’s greatest strengths, as newcomers play an essential role in economic growth, innovation, and entrepreneurship. Closing the door to the benefits of an open economy would cause untold damage. Instead, Clausing outlines a progressive agenda to manage globalization more effectively, presenting strategies to equip workers for a modern economy, improve tax policy, and establish a better partnership between labor and the business community.

Accessible, rigorous, and passionate, Open is the book we need to help us navigate the debates currently convulsing national and international economics and politics.

If I had to assign policymakers one up-to-date guide to the latest economic policy issues on taxes and trade it would be this one. Kimberly Clausing has done research in both areas and has been a leader in the economics of international corporate taxation, including profit shifting by multinationals, and it shows throughout this book. Open makes a strong, fact-based case for openness towards trade and immigration.

"Global integration will not work if it means local disintegration. Kim Clausing’s important book lays out the economics of globalization and, more important, shows how globalization can be made to work for the vast majority of Americans. I hope the next President of the United States takes its lessons on board.”—Lawrence H. Summers, Harvard University, former Secretary of the Treasury

“It is all too easy to blame the recent troubles of advanced economies—including slower growth, rising inequality, and lower social mobility—on economic globalization. Kimberly Clausing’s comprehensive but crystal-clear new book shows that ‘the fault lies not in our stars, but in ourselves’: if only the political will is there, national policy can harness globalization as a force for inclusive growth. This is a message that thoughtful citizens of every political stripe need to absorb.”—Maurice Obstfeld, University of California, Berkeley, and former Chief Economist, International Monetary Fund

“Open provides a vitally important corrective to the current populist moment. Clausing brings the underlying economics to life, showing that walls won’t keep prosperity trapped within; they’ll keep new ideas out, deter valuable foreign capital, close off investment opportunities, prevent our businesses from learning from others, and destroy the vigor that comes with a vibrant immigrant community. Most important, Open points the way to a kinder, gentler version of globalization that ensures that the gains are shared by all.”—Justin Wolfers, University of Michigan

“Anyone interested in the biggest economic debates of our time would benefit from reading Open. Kimberly Clausing marshals a wide range of evidence and analysis to address the question of how to advance the prospects of the middle class. Her answer is a combination of timeless truths about the importance of openness updated in often novel ways to address the challenges of today’s global economy.”—Jason Furman, Harvard University, former Chairman of the Council of Economic Advisers

“Clausing, a respected international economist and one of the world’s leading experts on multinational firms’ responses to tax policy, has created a clarion call for a return to reason by polarizing forces on both sides of the political isle. There is something in here for people on both sides to love and to hate, but plenty for everyone to learn.”—Katheryn Russ, University of California, Davis

Why does this sound a lot like the apologists for communism? "It just wasn't implemented right!" Globalization has proven itself destructive to wide swaths of the lower and middle working classes of the industrialized nations. Sure, its been a great deal for the cognitive-elites and ruling classes who are able to insulate themselves from competitive pressures, and even thrive by exploiting lower labor costs. Mitigating the costs of globalization for a nation like the U.S. requires adopting ever more socialist policies to keep the blue collar workforce from being obliterated. Which is just a slower form of obliteration.