The Case For An ABA Accreditation Standard On Employment Outcomes

Students graduating from American Bar Association (ABA)-accredited law schools over the past ten years have faced a declining entry-level legal employment market, stagnant or decreased starting salaries, and increased tuition debt burdens. While most law schools report strong legal employment rates, some consistently place fewer than 40 or 50 percent of their graduates in law jobs (roughly defined as those full-time, long-term jobs for which bar passage is required or the J.D. degree is an advantage in obtaining or performing the job) within 9-10 months after graduation. At least partly in response to the declining legal employment market, law school applications and enrollments have decreased sharply in the past six years. However, some law schools with persistently very weak graduate employment outcomes have lowered admissions standards in order to minimize reduction in class sizes. In doing so, they almost inevitably exacerbate existing problems because their bar passage rates suffer and their graduates’ employment prospects are further diminished. 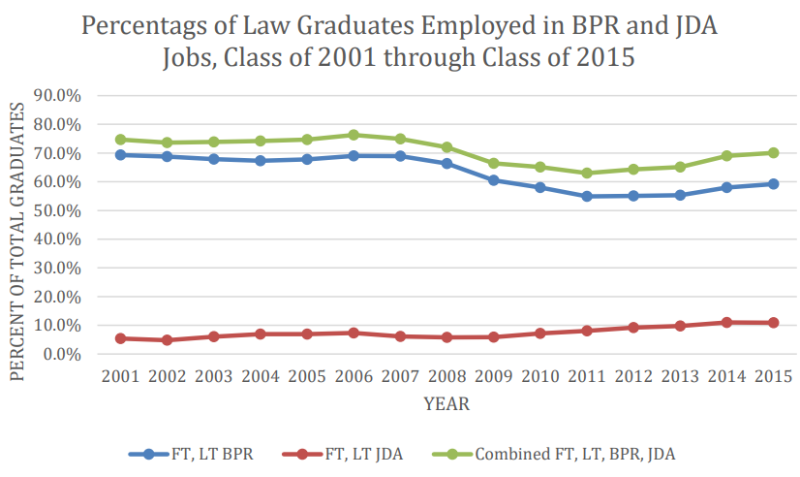 The perfect storm of increased student debt and diminished employment outcomes has drawn a wide range of responses, including two reports from American Bar Association presidential task forces, and extensive analysis and commentary by a range of legal education observers. This paper builds on the preexisting analyses by assembling the data and reviewing the literature, and then advocating the adoption of a new ABA accreditation standard on law graduate employment outcomes. The standard fills the gap in the current standards that allows law schools to pursue admissions policies that minimize enrollment reductions without regard to the impact on employment outcomes. An employment outcomes standard and could be adopted in addition to or in lieu of the bar passage standard.

Update #1:  Michael Simkovic (USC), Should Law Schools be Penalized for Admitting Students From Wealthy Families Who Are Not Motivated to Work?:

Scott F. Norberg argues for a law school accreditation standard tied to student employment outcomes.  The proposal is interesting, and may have some advantages over a standard tied to bar passage rates, for example because it does not give state bars--who can make the bar exam more or less challenging and have incentives to strengthen barriers to entry--excessive control over access to legal education. However, there are several potential concerns.

Employment is systematically higher among certain demographic groups across education levels for reasons that have little to do with value added by law school.  An employment-outcomes based standard could encourage law schools to focus on admitting groups with higher expected employment.

Why do you think it hasn’t come up before? It seems like an obvious area for the ABA to monitor, given that it already collects extensive employment data and, as you point out, a number of other accrediting bodies incorporate employment outcomes into their evaluation of programs. It’s something that schools would instinctively resist. Maybe people had not been aware [of] the gap [in legal employment outcomes] that’s there. The research I did brings out some data that may not have been previously noticed. There probably has been a sense that [ABA standards pertaining to] bar pass, attrition, and admissions effectively assure that graduates of schools are finding legal employment in sufficiently large numbers. But when you take a closer look at that data, you see there is a small but not insignificant group of schools with persistently very weak employment outcomes.

Tell me how you reached the 60 percent threshold for legal jobs. Why is that the magic number? I offer the draft standard as a starting point for discussion. I think if the [ABA Council] and legal education more broadly takes up the proposal and debates it, that’s something that might be revised. Part of it has to do with looking across law schools today and seeing what the maximum employment rates are at the programs with the best outcomes, and looking back from that to account for the fact that historically only about 80 percent of students pass the bar on the first time. So there’s some allowance for that, and for other sorts of conditions that lead some students not to get legal employment within 10 months after graduation. That’s how I get to the minimum number. But it deserves a good bit of discussion before adopting a standard, if we get to that point.

If you believe that your Panglossian take on law school outcomes held true today (as opposed to like 1993 through 2008 or whatever convenient dates you chose), you would not be against this proposal. Res ipsa, man. And yes, we all know that there is a strong correlation between socioeconomic status and the rank of one's law school, just as there is for undergrad (I believe that your alma mater's Pell Grant percentage was in the single digits when you were an undergrad). So yeah, certain demographic groups that are more likely to get cushy jobs are also more likely to be in cushy law schools.

"There's no claim that the premium is the same for everyone--just that it's high enough for the vast majority of people who go to law school that a law degree is a good investment."

Only if you don't consider the lost wealth from all of those additional student loan payments, which your study does not consider but multiple subsequent studies have placed at a roughly 8x loss creator; that is to say that, for example, graduating with $50k in student loans equates to $200k in lost wealth by retirement, primarily from lower home equity and retirement savings. So for your average law school grad with her $150k in law school debt (exclusive of interest, bar costs, undergrad debt, etc), you're talking $600k in lost wealth. Again, that's before we bake in interest, undergrad debt, etc. Bye bye, law school premium.

And that's my generous analysis: a study out of LIMRA in 2015 found that $30k in student loan debt at age 22 actually leads to $350k less in 401(k) holdings by retirement, which is more than a 10x multiplier. Scale that up to law school debt... it's pretty brutal.

P.S. Still working off grants from LSAC and Law Access?

Or reduce the school's ability to receive Federal loan money if employment drops too low.

The problem with your reasoning is that there are always immediate jobs for grads of the top schools. Even in a deep recession there are still 15k+ entry level jobs, the majority of which go to top 50 law grads. So not everyone needs to shut down, just the schools below this threshold.

Simkovic & MacIntyre's research is about the "premium" or boost to earnings from a degree, not about the raw outcomes without regard to the next best alternative. Comments here are completely consistent with that value added perspective.

If you read The Economic Value of a Law Degree and their other studies, they break down the earnings premiums by sex, race, age, college major, percentile distribution and macroeconomic conditions at graduation.

There's no claim that the premium is the same for everyone--just that it's high enough for the vast majority of people who go to law school that a law degree is a good investment.

"Employment is systematically higher among certain demographic groups across education levels for reasons that have little to do with value added by law school. An employment-outcomes based standard could encourage law schools to focus on admitting groups with higher expected employment."

Heh. After years - years! - of boldly proclaiming that his research all but proves for all time that there is no discernible wage difference between elite law schools and 4th tier law schools, no discernible wage difference between JDs who practice law and JDs who don't, that every lawyer gets a massive wage premium, on and on and on* - after years of this messaging, it is downright hysterical to find Mike protesting an ABA regulation that would actually make the underlying data public so everyone can see its present-day veracity. Of course the ABA should collect and disclose salary information from every law school. This isn't even a question.

One might further note that even today, with the U3 unemployment rate under 4% - for a national population where not even 4 in 10 adults have any sort of college degree - the unemployment rate for law school grads TEN MONTHS after graduation is 8% or just a hair underneath it. Imagine what it would be had so many law schools not decided to cut their enrollment by a third or even half...

*This is before we get into the real howlers like the notion that all depression among law students and lawyers is becuz genetics [as opposed to the 40-50% that every mental health professional thinks] and therefore law schools have no obligation to do anything about it because it's as immutable a characteristic as their students' heights.

I agree. When a recession or depression hits the United States, all law schools should simply close. It would be unethical for them to educate students for whom there are no immediate jobs. But this is only the beginning. The same rule should apply to all colleges, universities, and graduate programs. Indeed, in a really deep depression, we should close the high schools as well.