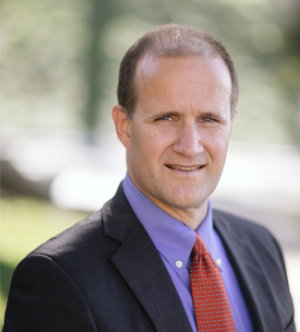 James A. Gash, associate dean for strategic planning and external relations and professor of law at the Pepperdine School of Law, has been named the eighth president and CEO of Pepperdine University. Gash is a renowned education administrator, legal scholar, global justice advocate, and attorney. He was selected by the Board of Regents Wednesday afternoon and will succeed Andrew K. Benton on August 1, 2019. Benton announced last March that he planned to step down at the end of the 2018–2019 academic year after 19 years as president.

“The board’s selection of Jim Gash to serve as the next president of Pepperdine is an auspicious moment in the history of this remarkable university,” said Ed Biggers, chair of the Board of Regents. “Throughout his venerable career at Pepperdine and beyond, Jim follows in the footsteps of Pepperdine presidents before him who have demonstrated the kind of inspiration, integrity, strength, and measured leadership that have made this university into the elite academy it is today. We will be fortunate to have Jim’s guiding vision for Pepperdine as we write our next chapter and continue to be a leading university in Christian higher education.”

Biggers also praised the robust participation from the Pepperdine community throughout the search and the work of the Presidential Search Committee, which was led by regent Dale Brown (’64) and committee vice chair Harold Smethills.

“For the past year, the Presidential Search Committee along with the Board of Regents have worked tirelessly to identify the next chapter of Pepperdine leadership,” said Biggers. “I’m grateful for the commitment and support of each of these groups, which have done an exceptional job gathering and listening to community feedback and carefully deliberating the qualities of each candidate.”

As president, Gash will have the primary responsibility for the strategic leadership of the institution. In the coming years, he will lead the University through major initiatives to support the University’s Christian mission and reputation, strengthen student learning and scholarship, enhance faculty research and recruitment, and develop new resources that advance its vision to become a premier, global, Christian university. The first alumnus to assume the University’s presidential mantle, Gash will be formally introduced as president-elect to the Pepperdine community at 9 AM on Monday, March 4 at a special community event in Elkins Auditorium on Pepperdine’s Malibu campus.

As the associate dean for strategic planning and external relations, Gash provides operational oversight for many of the School of Law’s signature development initiatives. As professor, his areas of focus are torts, evidence, global justice, and international human rights. He also serves as the director of the esteemed Sudreau Global Justice Program at Pepperdine Law, is a Special Advisor to the High Court of Uganda, and was recently named chancellor of LivingStone International University in Mbale, Uganda.

Since 2010 Gash has visited Uganda more than 25 times with Pepperdine students to support the Ugandan judiciary and assist the country in its justice reform efforts. In 2016 he published his first book, Divine Collision, which chronicles how his life and the Ugandan criminal justice system were dramatically changed as a result of meeting a Ugandan teenage prisoner during Gash’s first visit to Uganda. The following year, Revolution Pictures released the award-winning and highly acclaimed documentary Remand about the Sudreau Global Justice Program’s transformative work in the developing world.

“Pepperdine has always been a story of unbridled progress and never more so than under the leadership of Andy Benton, who has propelled this university to the highest echelons of Christian higher education in the United States,” said Gash. “I am both humbled and thrilled to have the opportunity to build on his administration’s legacy of growth and excellence, fueled by the imagination, innovation, and creativity of Pepperdine’s talented faculty, staff, students, and alumni around the world.”

Prior to joining the faculty at Pepperdine, Gash worked for the litigation firm DeSimone & Tropio before serving as a law clerk to the Honorable Edith H. Jones, United States Court of Appeals for the Fifth Circuit. He later joined Kirkland & Ellis, focusing on civil and appellate litigation, until he joined Pepperdine as an associate professor of law in 1999. Gash is also the recipient of the prestigious Elizabeth Beckman Mentor Award and the Warren Christopher Award, which recognizes the State Bar of California’s international lawyer of the year. He is admitted to practice before the United States Supreme Court, the Fifth Circuit Court of Appeals, and the US District Court for the Central District of California.

Jim is one of my dearest friends, and I am thrilled for him, for Joline, and for Pepperdine. As Dean, I am saddened by the huge hole he will leave at the law school, and we will all miss his daily presence among us. But we are excited beyond measure at the prospect of what this incredible man of God will do to help the university and each of its five schools reach higher than we ever thought possible.

I can't help thinking that Gash was making his 25 trips to Uganda with Pepperdine students during the period that Uganda was developing and ultimately passing even harsher anti-gay legislation and other bills enforcing a particular brand of "Christian" morals on Ugandans. Did Gash have a supportive role in that despicable effort, that was furthered by American "evangelicals"?

I read his book. Took pics with him at Uganda and I'm thrilled to see his success