Donald Knuth is one of the world’s most famous living computer scientists. He’s known for his pioneering efforts to bring rigorous mathematical analysis to the design of computer algorithms. An emeritus professor at Stanford University, he’s currently writing the fourth volume of his classic book series, The Art of Computer Programming, which he’s been working on since the early 1960s.

Given Knuth’s renown, many people seek him out. If you’re one of those people, however, you’ll end up disappointed. On arriving at Knuth’s homemade Stanford homepage, you’ll notice that no email address is provided. If you dig deeper, you’ll eventually find a page named email.html which opens with the following statement:

I have been a happy man ever since January 1, 1990, when I no longer had an email address. I’d used email since about 1975, and it seems to me that 15 years of email is plenty for one lifetime.

Knuth does provide his mailing address at Stanford, and he asks that people send an old-fashioned letter if they need to contact him. His administrative assistant gathers these letters and presents them to Knuth in batches, getting urgent correspondence to him quickly, and putting everything else into a “buffer” that he reviews, on average, “one day every three months.”

Knuth’s approach to email prioritizes the long-term value of uninterrupted concentration over the short-term convenience of accessibility. Objectively speaking, this tradeoff makes sense, but it’s so foreign to most tenured and tenure-track professors that it can seem ludicrous — more parody than pragmatism. This is because in the modern academic environment professors act more like middle managers than monastics. A major factor driving this reality is the digital communication Knuth so carefully avoids. Faculty life now means contending with an unending stream of electronic missives, many of which come with an expectation of rapid reply.

When email first spread to campuses in the late 1970s, it simplified crucial tasks like communicating with distant collaborators, but as its ubiquity grew, it became a public portal through which the world beyond close colleagues could make increasing demands on a professor’s time and attention, making email into a kind of digital water torture for the scholar struggling to think without interruption.

Another factor driving the professoriate’s drift into middle management is a significant increase in administrative demands. In part, this is due to the growth of university bureaucracy, which, once established, inevitably consumes the time and attention of its subjects to justify its existence.

A subtler factor arose as an unexpected side effect of the introduction of “productivity-enhancing” networked personal computers to professional life. As the economist Peter G. Sassone observed in the early 1990s, personal computers made administrative tasks just easy enough to eliminate the need for dedicated support staff — you could now type your own memos using a word processor or file expenses directly through an intranet portal. In the short term, these changes seemed to save money. But as Sassone documents, shifting administrative tasks to high-skilled employees led to a decrease in their productivity, which reduced revenue — creating losses that often surpassed the amount of money saved by cuts to support staff. He describes this effect as a diminishment of “intellectual specialization,” and it’s a dynamic that’s not spared higher education, where professors spend an increasing amount of time dealing with the administrative substrate of their institutions through electronic interfaces.

We can actually quantify the background hum of busyness that Knuth so assiduously avoids. In 2014, the Boise State anthropologist John Ziker released the results of a faculty time-use study [The Long, Lonely Job of Homo Academicus], which found that the average professor spent a little over 60 hours a week working, with 30 percent of that time dedicated to email and meetings. ... 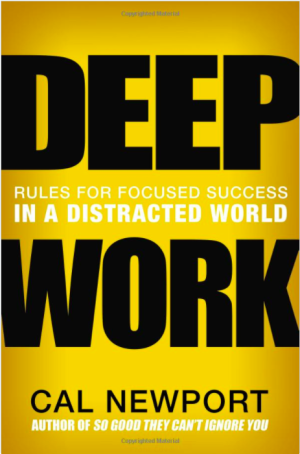 In 2016 I published a book titled Deep Work (Grand Central). It argued that the knowledge economy is systematically undervaluing uninterrupted concentration and overvaluing the convenience and flexibility offered by new technologies. If you’re Google, for example, and you invest an extraordinary amount of money to hire elite programmers but then bombard them with email and meeting invitations, their cognitive capacity will be significantly impeded — thereby diminishing both the quality and quantity of the code they produce. From a bottom-line perspective, a company like Google is better off creating a Knuth-style work environment in which high-performers work for long stretches free from distractions — even if doing so makes other internal activities less convenient.

Deep Work resonated because there’s a growing sense that the way we work today — defined by hyperactive digital distraction and onerous administrative burdens — is both strangling productivity and making people miserable. However, the book has largely failed to spark major business overhauls, and for good reasons. In the business world, a big culture change is risky; if it doesn’t work right away you could lose your competitive edge. It also requires upfront investment — you can’t have Donald Knuth, for example, without paying for his assistant. To prove the long-term value of deep thinking in a distracted world, some industry needs to take the leap.

I can think of at least three strong arguments for why higher education should be that industry, significantly restructuring its work culture to provide professors more uninterrupted time for thinking and teaching, and require less time on email and administrative duties.

First, universities have more freedom to experiment than a business struggling in a competitive market. ...

Second, by prioritizing deep work universities would get better at their primary tasks of research and pedagogy. Producing and organizing complex knowledge requires uninterrupted concentration — the more time you have to focus, the better the work you produce. ...

Finally, a reorganization of academic life to support careful thought and sustained attention would produce benefits that extend well beyond the campus. It would allow higher education to proudly present itself as the last bastion of focus in a distracted world; a citadel of concentration defending the life of the mind against our culture’s slide toward digital noise. ...

Finally, a reorganization of academic life to support careful thought and sustained attention would produce benefits that extend well beyond the campus. It would allow higher education to proudly present itself as the last bastion of focus in a distracted world; a citadel of concentration defending the life of the mind against our culture’s slide toward digital noise.

What concrete changes are needed to create a Donald Knuth-style academic culture? I propose two starting points: a return to intellectual specialization, and an overhaul of the way we structure faculty service obligations.

A second necessary change to academic culture is reforming the way faculty service is structured. These obligations are an essential part of supporting the university, which depends on faculty members to review applications and tenure cases, participate in self-governance, and take on departmental leadership roles. But for many professors, service has transformed from an important duty to a serious problem. This is due, in large part, to the haphazard manner in which the obligations tend to be distributed. A typical approach to service is to say “yes” to a fire hose of incoming requests until you become so overcommitted that you retreat in desperation to catch up. ...

Professors have a fixed amount of time; the more that’s dedicated to service, the less that can be dedicated to research and teaching. Instead of ignoring this reality, we should clearly articulate these trade-offs by specifying the exact amount of time a faculty member is expected to devote to service each year. That amount would be negotiated between a professor and a department chair, and the professors would be encouraged to enforce the limits of their service budgets.

These budgets would vary depending on the career phase and interests of individual professors. A faculty member actively engaged in research or creating new courses might be responsible for only a handful of service hours per week, while others would have more substantial obligations. Pre-tenure faculty members would presumably have smaller budgets than full professors who no longer need to consider promotion, and so on. The occasional major service commitment, like serving as department chair, would necessitate a large budget, but even in this case, making the trade-off clear is important. If the time required to be department chair is absurd, it’s useful to quantify this absurdity as a stark case for additional administrative support, or to help calibrate the proper compensation in terms of course buyouts or leave. ...

Society has been engulfed by a crisis of concentration that has hit higher education particularly hard. Our time and attention have gradually shifted from the specialized intellectual tasks that directly produce value to busywork, such as managing our inboxes and tackling nonessential administrative obligations.

Instead of giving in to this reality, we should reaffirm the importance of the life of the mind by reforming the academy as a beacon of concentration in an age of distraction. Higher education can lead the way in turning back the tide of electronic chatter that threatens to overwhelm us. Do we have the will to protect what’s important against the pull of what’s easy? Will we stand for the power of concentration over the shallowness of rapid communication? And if not us, then who?

Donald Knuth’s commitment to being on the bottom of things might seem eccentric, but it also might be the thing that saves academic life.

This is quite a contrast to Adam Grant's recent Op-Ed piece in the Times: "No, You Can’t Ignore Email. It’s Rude."

Knuth's point is that there is a balance between teaching and research which, due to email, has impacted the academician's ability to actually perform said research. If you're in a school where little to no research is done, feel free to spend 60 hours a week in your email, but a balance needs to be struck for others for whom research is a vital part of the school's raison d'être.

Anand Desai, I agree about a quick phone call working best, but only if those calls get answered. Today, with all the phone scams, robocalls, and solicitations, even more people tend to let phone calls go to voice mail, thus, making connecting on a quick call more difficult.

The reason that I switched more to email was because I got tired of playing phone-tag and being interrupted with call-backs. I can't tell you how often I work into the morning hours because that's the best time for no interruptions. But, if I send an email out at 1:00 AM and a client sees it pop up at that time, he may think nothing about calling me then with "an emergency tax question."

Now, what I'm hating are text messages, for which archiving and printing them for the record and for follow-up becomes a problem.

So what Knuth and you imply is that professors don't have the discipline necessary to make time for deep thought, that they can avoid looking at email as soon as it comes in. Interesting...

I tend to agree. If you've ever been at work and gotten a phone call, "I just sent you an email; have you seen it yet?" then you know exactly what Knuth is doing.

Although the article doesn't mention it, I 'd bet that Knuth does not use any "social media" either.

Knuth sounds like my law professors at Harvard, who made it quite clear that answering students' questions was their lowest priority. I cannot imagine meeting my students' needs without email.

A quick phone call can work wonders versus hours of composing, interpreting, and rephrasing many emails.

Schedule the not-so-quick interruptions online and circulate highlights after for the best of both worlds :)