New York University's medical school in August stunned the world of medical education with the news that it had raised enough money to offer full-tuition scholarships to all students (more than 400 across classes) going forward.

While other medical schools have been moving to reduce tuition paid by students (and the debt many of them accrue), the NYU effort was the largest and most dramatic to date. With the tuition sticker price at NYU topping $55,000 (similar to the tuition of other top private medical schools), the question for many was whether NYU, already seen as a leading medical school with no shortage of applicants, would see significant gains in its applicant pool.

The answer is an unqualified yes.

Total applications to NYU's medical school increased by 47 percent, to 8,932. ... NYU Med saw a 102 percent increase, to 2,020, in applications from those who are a member of a group that is underrepresented in medicine (including black, Latino and Native American students). The largest percentage increase was among those who identify as African American, black, or Afro-Caribbean. Applications from this group went up 142 percent, to 1,062. ...

Of course what remains to be seen is whether NYU has a higher yield of its top applicants.

C. Michael Gibson, a professor of medicine at Harvard University, is among those who have been using social media to test the power of NYU's free tuition offer. The results may not be scientific, but they suggest NYU may have a strong yield this year. 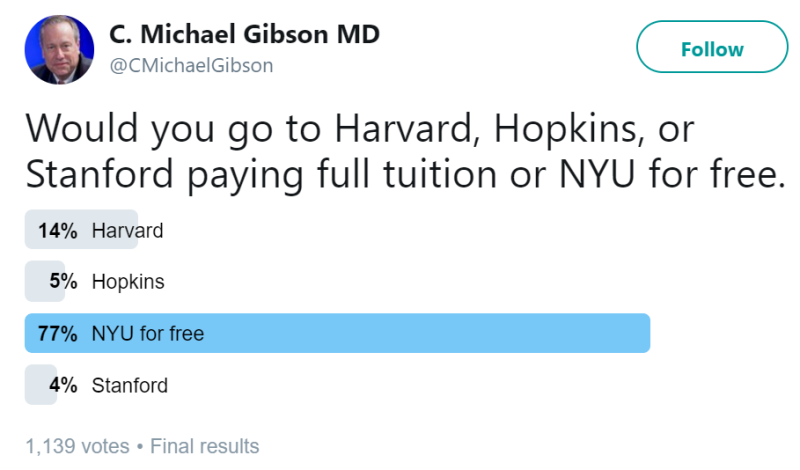 For many years law schools have offered full-tuition scholarships to deserving students. Only now are medical schools catching up. Medical schools are starting to realize that they are losing top talent to law schools. Medical students pay more in tuition, attend school an extra year, and must spend years in residency earning a meager salary. On the contrary, law students pay less, graduate a year sooner, and can start earning real money immediately after graduation. The rational college graduate would choose law school over medical school.