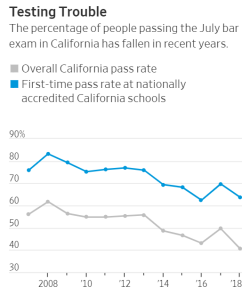 If a law school can’t prepare three-quarters of its graduates who take the bar exam to pass, it shouldn’t exist.

That’s the view of the American Bar Association’s accreditation council, which is renewing a push to toughen requirements in the face of historically low passage rates for attorney-licensing exams. The ABA group retreated from an earlier attempt after detractors said it would hurt schools with larger enrollments of minority students and those in states with more difficult exams.

The proposal—to condition ABA accreditation on meeting a 75% bar-pass rate—will be back on the table this month at an ABA meeting in Las Vegas and is likely to go into effect this year.

“If a school can’t get enough of its students to have a high enough pass rate, then there’s a problem,” said Barry Currier, the ABA’s managing director of accreditation and legal education.

The percentage of law-school graduates passing the bar exam has plummeted in recent years, alarming legal educators and consumer advocates.

Nationally, the average score on a key multichoice section used by most states fell in 2018 to a low not seen in decades. That led to lower pass rates across states such as Florida, where the first-time test taker rate fell just over 4% to 67.2% on last July’s test. In Texas, 73.4% of first-time takers passed last July, down 4.5% from 2017 but higher than in 2015. Some states have started to see upticks.

Declines have been especially acute in California, which administers one of the nation’s most difficult tests. The state said in November that 40.7% of test takers passed the most recent bar exam, the fifth straight year where more failed than passed. Among first-time test takers who graduated from nationally accredited California schools, 63.8% passed.

Many attribute the trend to weaker-credentialed students who were admitted to fill seats in law schools following the last economic downturn. Others blame the tests themselves or changes in the way students learn.

The proposed new ABA standard would require 75% of a given school’s test takers to pass the bar within two years of graduation, or that school will risk losing accreditation. An ABA analysis of 2015 graduates identified 19 schools that wouldn’t have met the new threshold that year. ...

The tougher scrutiny comes as the price of law school is rising, leaving many graduates who fail the exam with six-figure debt loads unable to practice law. ...

Schools have reacted to the ABA scrutiny and falling passage rates by tweaking curriculum to include more bar-prep courses and trying to intervene early if students appear likely to fail. A study of bar-passage predictors among University of Cincinnati College of Law students found that “students who take more rigorous upper-level bar courses are more likely to pass the bar,” said Amy Farley, one of the lead researchers.

It should probably be noted that

1) thousands more people pass the bar exam than there are full-time, long-term, license-required jobs for them, regardless of salary (many of which do not remotely justify the cost of law school) and

2) the number of such jobs has been declining over the last several years even as the economy recovered.

Most Bar Exams test subjects covered in the first year of law school (estates and trusts excepted, so we may have to fold that into the 1L curriculum). Maybe we should move the Bar Exam to after the 1st year of law school, and you can't continue unless/until you pass (3 tries). Then, one more year of electives, and you can practice. Or, if you crave extra credentialing, you can take a 3rd year, which would be an LLM-style course of study. Oh, and the law school itself has to pay off the law school debt of the students who can't continue after their 1L year. That way, no more marginal law schools taking on marginal law students and loading them up with 6 figures of debt that they will never be able to pay off by practicing law because they couldn't pass the bar exam.

There is one reason and one reason only that bar exams scores are falling--law schools are admitting fewer and fewer qualified students. Instead of complaining, law schools should fix their educational model to attract better applicants and to turn out better graduates. You can find out how to do it right here https://www.amazon.com/How-Grow-Lawyer-Professors-Students/dp/1726737764/ref=pd_rhf_dp_p_img_5?_encoding=UTF8&psc=1&refRID=XZHNPNV9BMDGR54KSEZ7. Some law schools, like FIU, are doing this, but many law schools just continue the traditional ineffective ways of teaching students with just a few changes at the edges.

Isn't the Bar Exam just a restraint of trade mechanism?
The ABA should still keep the exam and make it tough but anyone graduating from law school with a JD should be able to practice. Passing the Bar exam could lead to those lawyers charging higher fees but for most legal work, almost any lawyer that hasn't passed the Bar (or even taken the test) should be able to do wills, etc. and at lower fees. The truly bad lawyers will be forced out of practice either by lack of clients or malpractice.

Before banning people from law school for having a, say, 50-50 chance of being allowed to practice - and consider Jane Yakowitz's paper finding the bar-failers' lot isn't so bad - should we consider simply not publicly guaranteeing these places' loans?

"The percentage of law-school graduates passing the bar exam has plummeted in recent years, alarming legal educators and consumer advocates."

Wait, didn't the new head of AALS tell us just last week that the state of legal education is "excellent?"