The Resilience Of Religion In American Higher Education 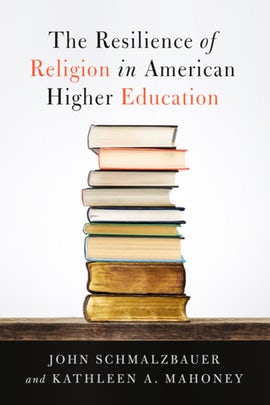 William F. Buckley Jr.'s 1951 book God and Man at Yale popularized a view of higher education as hostile to faith. A new book, however, The Resilience of Religion in American Higher Education (Baylor University Press), finds faith alive and well in American higher education. The authors find that resilience evident both at public and private institutions. And they find it at religious institutions with varying ideas about their missions. ...

The authors are John Schmalzbauer, a professor of religious studies at Missouri State University and the author of People of Faith: Religious Conviction in American Journalism and Higher Education, and Kathleen A. Mahoney, a senior staff member at the GHR Foundation and author of Catholic Higher Education in Protestant America: The Jesuits and Harvard in the Age of the University. They responded via email to questions about their new book.

Q: Many evangelical colleges have been criticized for their views on sexuality (in particular ideas about gay people) and science (a belief by some that the Bible is to be taken literally, challenging ideas about evolution and so forth). Do you see those views holding back these colleges?

A: Evangelical colleges will find it increasingly difficult to maintain conservative positions on LGBT issues. According to a 2017 survey conducted by the Public Religion Research Institute, 53 percent of young white evangelicals favor legalizing same-sex marriage. Older evangelicals feel very differently about this issue. This gap will create tensions and conflicts for evangelical colleges and could further depress enrollment. Recently, the Council for Christian Colleges and Universities endorsed sexual orientation and gender identity laws that include broad religious exemptions. While such legislation could insulate CCCU institutions from legal challenges, it will not eliminate evangelicalism’s generational divide on LGBT issues.

As for religion and science, there is a wide spectrum of views on evolution. Some colleges hold to a young earth creationist position, appealing to evangelicalism’s right flank. Another set of institutions affirms the harmony of evolutionary biology and Christian theology, along the lines of the BioLogos Foundation. In the middle are places where the boundary lines are unclear, a situation that has sometimes led to the firing or resignation of science faculty. Such uncertainty makes it hard for evangelical colleges to recruit and retain scientists.

Q: During the Trump presidency, Liberty University has emerged as the president's favorite college and its president has become a consistent advocate for President Trump. How is this shaping public perceptions of religious higher education?

A: The alliance between Liberty University and the Trump administration contributes to the cynicism many Americans have about religion and public life. While such coalitions go back to the Reagan administration (and are rooted in the fraught racial history of white evangelicalism), there is a growing sense that evangelicals will do anything for political power. Because of its immense online footprint, Liberty looms large in public perceptions of Christian higher education. Yet scholars at dozens of other evangelical institutions (see, for example, the work of Kristin Kobes Du Mez, John Fea and Soong-Chan Rah) do not identify with Jerry Falwell Jr. and Franklin Graham. They are also alienated from the 81 percent of white evangelicals who voted for Trump. Many faculty have ditched the evangelical label. Others have articulated an alternative vision of evangelicalism that rejects misogyny, racism and xenophobia, though it is hard to shout louder than Falwell and Graham.

A fascinating topic. Good for Schmalzbauer and Mahoney for contradicting the CW ( per the Amazon review): "A well-worn, often-told tale of woe. American higher education has been secularized. Religion on campus has declined, died, or disappeared. Deemed irrelevant, there is no room for the sacred in American colleges and universities. While the idea that religion is unwelcome in higher education is often discussed, and uncritically affirmed, John Schmalzbauer and Kathleen Mahoney directly challenge this dominant narrative."

I have a "read zone" of 300 pp. or less. This book meets it at 295 pp. Unfortunately the New York Public Library doesn't yet have it; assuming they get it, I'll be an eager reader.