Los Angeles Times, One Year of Legal Pot Sales and California Doesn’t Have the Bustling Industry It Expected. Here’s Why: 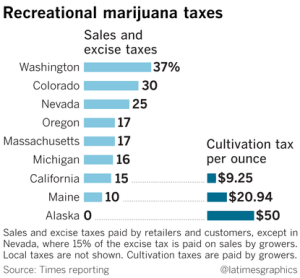 When Californians voted in 2016 to allow the sale of recreational marijuana, advocates of the move envisioned thousands of pot shops and cannabis farms obtaining state licenses, making the drug easily available to all adults within a short drive.

But as the first year of licensed sales comes to a close, California’s legal market hasn’t performed as state officials and the cannabis industry had hoped. Retailers and growers say they’ve been stunted by complex regulations, high taxes and decisions by most cities to ban cannabis shops. At the same time, many residents are going to city halls and courts to fight pot businesses they see as nuisances, and police chiefs are raising concerns about crime triggered by the marijuana trade.

Gov.-elect Gavin Newsom, who played a large role in the legalization of cannabis, will inherit the numerous challenges when he takes office in January as legislators hope to send him a raft of bills next year to provide banking for the pot industry, ease the tax burden on retailers and crack down on sales to minors.

“The cannabis industry is being choked by California’s penchant for over-regulation,” said Dale Gieringer, director of California NORML, a pro-legalization group. “It’s impossible to solve all of the problems without a drastic rewrite of the law, which is not in the cards for the foreseeable future.”

After voters legalized marijuana two years ago under Proposition 64, state officials estimated in there would be as many as 6,000 cannabis shops licensed in the first few years. But the state Bureau of Cannabis Control has issued just 547 temporary and annual licenses to marijuana retail stores and dispensaries. Some 1,790 stores and dispensaries were paying taxes on medicinal pot sales before licenses were required starting Jan. 1.

State officials also predicted that legal cannabis would eventually bring in up to $1 billion in revenue a year. But with many cities banning pot sales, tax revenue is falling far short of estimates. Based on taxes collected since Jan. 1, the state is expected to bring in $471 million in revenue this fiscal year — much less than the $630 million projected in Gov. Jerry Brown’s budget.

Marijuana is easily grown by individuals, and so will never have a high intrinsic value. Anything gardeners can grow themselves, and the legal system is no longer willing to ban, will become cheap and produced outside the reach of the tax system. When a state legalizes, it makes it easier for the home growers to create their own supply. Perhaps they should make GMO pot with some help from Monsanto, and make the users sign agreements not to save the seeds.

Is there a way to blame Trump for this?

I don't think it was all about taxes - just keeping a bunch of underemployed troublemakers in a hazy fog of indifference is worth its weight in weed... and if the evil GOP tries to take your blunt - VOTE!!1!

Recreational drugs sales should be done by the state with all revenues going towards education and health care. California's prices drop so fast no one can make any money selling the stuff anymore. Standardize it and low-ball the price on everything.