Tax And The Basis Of Sex (Plus My Connection To RBG) 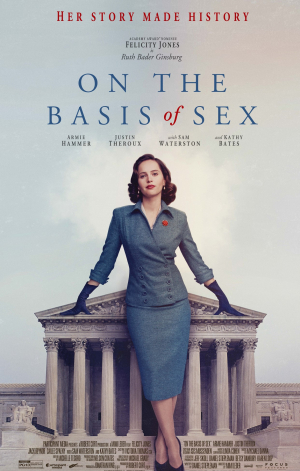 It never occurred to me that a Tax Court decision could star in a motion picture, but it has happened. The film has a pretty provocative title On The Basis of Sex, but they don't mean it that way. Felicity Jones portrays a young Ruth Bader Ginsburg (RBG) ... and Arnie Hammer as her husband Martin Ginsburg. I have it on very good authority that Martin Ginsburg was a first-rate tax attorney (See follow-up). And another star in the movie is a Tax Court decision. How often does that happen? ...

The decision is  Charles E. Moritz v. Commissioner of Internal Revenue, which was decided by Judge Norman O. Tietjens in 1970 in favor of the IRS. Mr. Moritz had represented himself — not surprisingly given the low stakes.  The decision was appealed to the Tenth Circuit where Mr. Moritz was represented by  Ruth Bader Ginsburg and Martin Ginsburg backed up by Melvin Wulf of the ACLU and Weil, Gotshal & Manges.  The lead attorney for the United States was James Bozarth played by Jack Reynor.  Sam Waterston, who has played a lawyer on TV more than once, portrays Solicitor General Erwin Griswold. ...

Mr. Moritz was contesting a $328.80 deficiency.  He had taken a deduction under Code Section 214 - Expenses for household and dependent care services necessary for gainful employment.  Mr. Moritz was an editor for the publishing firm Lea & Feibiger.  He had an office in his home, but he had to travel extensively to meet with authors.

There shall be allowed as a deduction expenses paid during the taxable year by a taxpayer who is a woman or widower, or is a husband whose wife is incapacitated or is institutionalized, for the care of one or more dependents (as defined in subsection (d)(1)), but only if such care is for the purpose of enabling the taxpayer to be gainfully employed.

Since Mr. Moritz had never married, he didn't qualify. ... "Petitioner is treated no differently from other unmarried, past or present, males. His remedy lies with Congress, and not in this Court." ...

The appeal to the Tenth Circuit was argued by the Ginsburgs.  They split the oral arguments with Martin doing the tax piece and RBG handling the constitutional issue.  ...

We conclude that the classification is an invidious discrimination and invalid under due process principles. It is not one having a fair and substantial relation to the object of the legislation dealing with the amelioration of burdens on the taxpayer. See Reed v. Reed, supra, 404 U.S. at 76, 92 S.Ct. 251. The statute did not make the challenged distinction as part of a scheme dealing with the varying burdens of dependents' care borne of taxpayers, but instead made a special discrimination premised on sex alone, which cannot stand.

Lila Thulin has The True Story of the Case Ruth Bader Ginsburg Argues in ‘On the Basis of Sex’ in Smithsonian.com.  There is an interesting claim that I want to check out.

It was the first time a provision of the Internal Revenue Code had been declared unconstitutional.

That's not quite as big a deal as it might sound.  The tax law was not codified until 1939 and then recodified in 1954.  In 1895, the Supreme Court ruled that the income tax was unconstitutional since to the extent it reached income from property it was a direct tax requiring apportionment. (Pollock v Farmers' Loan and Trust Company)  That's why the Sixteenth Amendment needed to be passed.

A.O. Scott reviewed the film for the New York Times. He doesn't even mention the Tax Court or what circuit was involved.  I love the New York Times, but when it comes to their tax coverage, don't get me started.

I was hoping for something from the most indefatigable chronicler of the Tax Court in all the blogosphere, Lew Taishoff, but he is passing.

Mr Reilly, I yield to no one in my admiration for Justice Ginsburg. But I report present cases only. I leave to you the Moritz case, and what will surely be a scintillating blogpost, which I eagerly look forward to reading.

Be sure to check out the trailer.  The best line is around 1:05 when Felicity Jones remarks "I don't read Tax Court cases".  RBG gave Ms. Jones credit for nailing the Brooklyn accent and I have to say that she sounded pretty good to me.

In the small world department, I clerked for the late William J. Holloway Jr., Chief Judge of the U.S. Court of Appeals for the Tenth Circuit. Judge Holloway wrote the opinion in Moritz v. Commissioner, 469 F.2d 466 (10th Cir. 1972), and a fictional Judge Holloway appears in the movie.  To commemorate Judge Holloway's first 15 years on the bench, his law clerks (including my future wife) presented him with a book in 1984 compiling all of the opinions he had written, including Moritz. I wrote about Judge Holloway's powerful impact on my professional and personal life here.

A couple more thoughts. When I worked at Treasury's Office of Tax Policy in the late 80's, we would ask ourselves whether we had the time, much less the smarts, to make a new rule "Marty-proof" and generally agreed not. For wonderful photographs and tributes to him as a tax lawyer, father, and spouse, see ""Chef Supreme: Martin Ginsburg," created by the justice's spouses in memoriam. I haven't actually made any of the recipes, but reading Marty's commentary is a delight. Order it here: http://supremecourtgifts.org/chefsupreme.aspx

Saw the movie last weekend and have two more posts. Interesting that no other writer interviewed James Bozarth who had the other side of the oral arguments. Would love to hear from anybody who was at DOJ tax at the time

"I love the New York Times, but when it comes to their tax coverage, don't get me started." That's discouraging; what's a Times reader to do? (Of course I know the answer: read other sources, e.g., Tax Prof Blog.) :)

Re "On the Basis of Sex," it was one of those movies that made me cry; doesn't happen often, but it did in this case.

I haven't seen the movie yet but, as one of RBG's students and first law clerks, I interacted with Marty many times. He was solidly, passionately, and tirelessly committed to RBG's career--and, as in everything else he did, impossibly charming. The words "feminist teddy bear of a leading tax lawyer" fit him quite well.

My wife and I saw the movie at the Simon Wiesenthal Center in Los Angeles. The movie is a sweet love story, about a tax issue. We both liked the movie. I thought it was lovely. Just about a nice, married couple, and taxation. Who could ask for anything more?

Plus Marty did the cooking and, as I recall from the first RBG movie, did most of the lobbying to get Ruth appointed to the Court. And I am sure he was supportive in many other ways. I haven't seen the movie yet, and don't know how well the actor represented Marty, but he was basically a feminist teddy bear, on the evidence, as well as the leading tax lawyer. Why can't you be both? And the great sense of humor that Ellen refers to. I remember Marty saying that he liked teaching tax because it was the most humorous subject in law school.

Here are Marty's remarks on receiving the ABA Distinguished Service Award in 2006. He not only discusses the case, but also displays his unmatched sense of humor and devotion to his wife. https://www.americanbar.org/content/dam/aba/publishing/aba_tax_times/06sum/serviceaward.pdf

I admire RBG, but I'm less sure about the hagiography. I also have to wonder about the portrayal of Marty Ginsburg in these movies. From the nation's leading tax lawyer he appears to have been transformed into some kind of feminist teddy bear. Is this reality or fantasy?