The introduction of quotas to get more women onto university recruitment committees in France has backfired and has actually led to far fewer female academics being hired, new research has revealed.

A male backlash against the equity measures is the most likely reason for the decline in female recruitment, according to analysis by Pierre Deschamps, an economist at Sciences Po, in Paris [Gender Quotas in Hiring Committees: A Boon or a Bane for Women?].

He investigated recruitment data from 455 hiring committees across three French universities in the years before and after the introduction of the requirement for recruitment committees to draw at least 40 percent of their membership from each gender.

’ modeling indicates that, had the quotas not been introduced, 38 percent more women would have been hired. “That’s enormous,” he said. 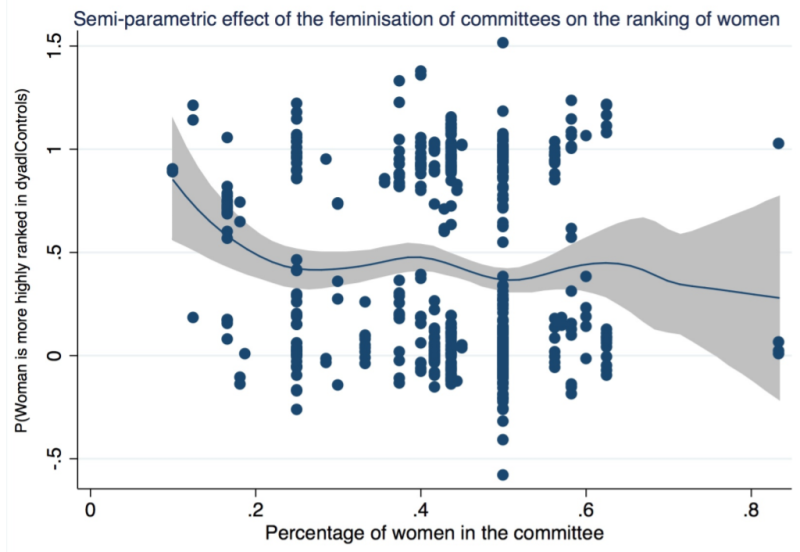 Nor have the quotas yet encouraged any more women to apply for positions, according to “Gender Quotas in Hiring Committees: A Boon or a Bane for Women?” a working paper from Sciences Po’s Laboratory for Interdisciplinary Evaluation of Public Policies.

Explanations exist; they have existed for all time; there is always a well-known solution to every human problem — neat, plausible, and wrong.

Policies that require women or minorities to sit on hiring committees in fields that are disproportionately filled by men and non-minorities only loads the few women and minorities in these fields up with additional service obligations that actually disadvantages them and impedes their ability to be successful in research (which is the currency of a faculty in a peer reviewed field). Imposing quotas for the number of candidates based on race and gender typically backfires as it can result in a disproportionate number of less qualified applicants coming from those groups, which only reinforces stereotypes that are sought to be denounced.

From the actual study rather than the "interpretive" article with the definitive misleading headline:

It is unclear whether this effect is driven by women being less likely to favour women in hiring, or through men voting against women as a reaction to the quota, though there is [only] some evidence in favour of the second channel.

Anyone who has been in business has experienced women being jealous of other women and hindering their opportunities. So, there is "some evidence" for that.

Quote: ’ modeling indicates that, had the quotas not been introduced, 38 percent more women would have been hired. “That’s enormous,” he said.

Modeling is about as credible in the sciences as advertising is in shopping. The one who controls the model, controls the outcome. Witness all the climate models of 15 years ago in comparison with the actual outcomes.

Does the word "cat fight" come to mind?

IOW, either feminists must admit men know best or that females are less qualified for these academic posts than their counterpart men. Which is it going to be, ladies? Hah ha.

The term "backlash” is biased. Perhaps they hired the best people?

It's almost as if there were something fundamentally incorrect about presuming that all groups would be proportionately represented everywhere in the absence of discrimination. Implementing policies to forcibly correct any discrepancies seems never to work out as intended.

Disparate impact rationale is built on this patently absurd presumption. Thus the intensity of opposition to any study of group differences in ability or preference.