The lecture focuses on the costs of public debt when safe interest rates are low. I develop four main arguments.

First, I show that the current situation in which, in the United States, safe interest rates are expected to remain below growth rates for a long time, is more the historical norm than the exception. If the future is like the past, this implies that debt rollovers, that is the issuance of debt without a later increase in taxes may well be feasible. Put bluntly, public debt may have no fiscal cost. 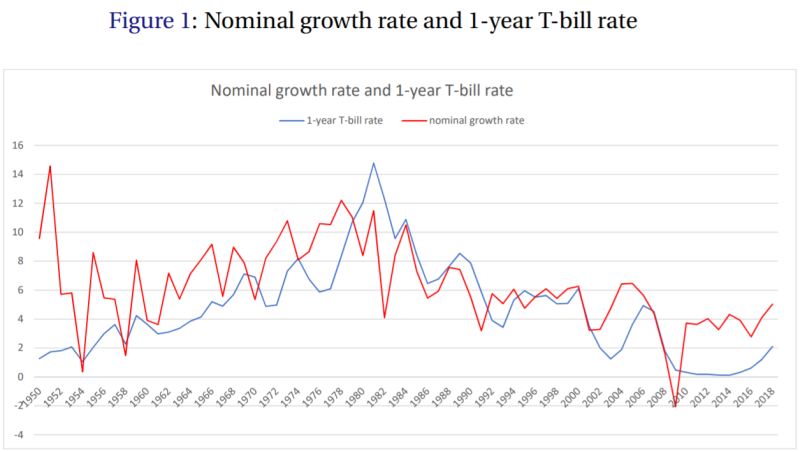 Second, even in the absence of fiscal costs, public debt however reduces capital accumulation, and may have welfare costs. I show that welfare costs may be smaller than typically assumed. The reason is that, in effect, the safe rate is the risk-adjusted rate of return on capital. If it is lower than the growth rate, it indicates that the risk-adjusted rate of return to capital is in fact low. The average risky rate however also plays a role. I show how both the average risky rate and the average safe rate determine welfare outcomes.

Fourth, I discuss a number of arguments against high public debt, and in particular the existence of multiple equilibria where investors believe debt to be risky, and by requiring a risk premium, increase the fiscal burden and make debt effectively more risky. This is a very relevant argument, but it does not have straightforward implications for the appropriate level of debt.

My purpose in the lecture is not to argue for more public debt, especially in the current political environment. It is to have a richer discussion of the costs of debt and of fiscal policy than is currently the case.

Washington Post op-ed (Jared Bernstein), A Very Good Economic Idea May Be About to Replace a Very Bad One:

The key points are disarmingly simple, and they’re ones I have written about before in this column. Part one is this: When a country’s growth rate is higher than the interest rate on its debt, the fiscal costs of sustaining its debt levels are somewhere between zero and low. The reason is that even if the government does not raise taxes to offset its higher debt, the ratio of debt to gross domestic product will decrease rather than explode over time. Part two: For most of the period covered by Blanchard’s research (1950-now in the United States), g>r, i.e., the GDP growth rate has exceeded the interest rate (same with the U.K., the euro area and Japan).

[I]t’s becoming increasingly doubtful whether there’s any right time for fiscal austerity. The obsession with debt is looking foolish even at full employment.

That’s the message I take from Olivier Blanchard’s presidential address to the American Economic Association. To be fair, Blanchard — one of the world’s leading macroeconomists, formerly the extremely influential chief economist of the I.M.F. — was cautious in his pronouncements, and certainly didn’t go all MMT and say that debt never matters. But his analysis nonetheless makes the Fix the Debt fixation (yes, they’re still out there) look even worse than before.

Olivier Blanchard is one of the world’s most respected economists. A native of France and longtime M.I.T. professor, he’s known for his rigorous and careful research on macroeconomics.

This past weekend, as Blanchard approached the end of his tenure as the president of the American Economic Association, the field’s main professional organization, he gave an outgoing address at a conference in Atlanta. It had a clear message: The world has been too obsessed in recent years with the supposed costs and risks of government debt.

Fiscal Times, Leading Economist Says Government Debt Might Not Be So Bad After All