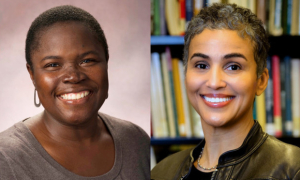 Rutgers Law School on Jan. 2 named Kimberly Mutcherson [left] as its new co-dean. Eight days later, the University of the District of Columbia David A. Clark School of Law announced that University of Maryland law professor Renée McDonald Hutchins [right] will assume its deanship in April.

The appointment of two African-American women to law school deanships in the span of two weeks would have generated substantial attention 10 years ago. Today, it has become less of an anomaly.

The number of women leading law schools has been rising steadily, as have the number of minority deans. Perhaps nowhere has that trend been more noticeable than among the ranks of minority women law deans. At least 19 minority women are currently serving as dean or interim dean, or soon will assume deanships, according to Catherine Smith, associate dean of institutional diversity and inclusiveness at the University of Denver Sturm College of Law who has been keeping an informal tally over the past year.

That figure constitutes 10 percent of all American Bar Association-accredited law schools. Among the diverse women leading law schools are L. Song Richardson at the University of California, Irvine School of Law; Angela Onwuachi-Willig at Boston University School of Law; and Camille Nelson at American University Washington College of Law. Diversity numbers are poised to increase this spring, as schools appoint new deans for the upcoming academic year. ...

Fully 35 percent of law schools are now helmed by women, according to data compiled by the Association of American Law Schools, a figure that’s up from 30 percent in 2015. Half of the top 10 schools in the U.S. News & World Report rankings have women deans, although none are minorities. The AALS was unable to provide data on the total number minority law deans this week, but they make up more than 16 percent of all deans, by Smith’s count.

You didn't mention that the Rutgers post was open because the previous Dean, Michael Cahill, left to go back to Brooklyn. With all due respect to Dean Mutcherson, this gives you some idea of the regard with which Rutgers is held these days.