Lesson From The Shutdown: Court Budgets 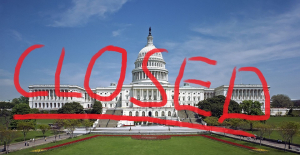 The partial government shutdown has affected different courts differently.  Readers likely know that the Tax Court closed December 28th but still held trial calendars the week of January 14.  For a while the Court said that later calendars would also go forward but as the shutdown wore on the Court wore down: it has now cancelled the trial calendars for January 21, 28, and February 4th and 11th.  The Court issued its last pre-shutdown opinion on December 27th.  It has since continued issuing orders as needed for pending cases but has issued no opinions or designated orders.

In contrast to the Tax Court, all other federal courts remained open.  The Administrative Office of the U.S. Courts (AO) administers the federal judicial branch, both the Article III judges and their Article I adjuncts, such as magistrates and bankruptcy judges.   It has made several announcements on its website about those courts' operation during the shutdown.  The current announcement says those courts will remain open through January 25th.  In addition, the other Article I courts have remained open: (1) the Court of Appeals for the Armed Forces; (2) the Court of Appeals for Veterans Claims; and (3) the Court of Federal Claims; and (4) the Court of International Trade.

I was curious, particularly about why the Tax Court was closed when the other Article I courts remained open.  It turns out the reason has to do with funding.  It is not intuitive.  I share my results below the fold.  As usual, I invite those with deeper knowledge to help out by using the comment function to correct any error or to give further explanation.

Let's start with the easy stuff.  Traditionally, Congress funds the government through a series of separate appropriation bills.  The key here is to remember that the current shutdown is a partial shutdown.  Congress passed, and the Trumpster signed, several of the traditional appropriation bills before the FY19 fiscal year started.  The two relevant to today's post are H.R. 5895 and H.R. 6157.  The first, H.R. 5895, appropriated $35 million for the FY19 operation of the Court of Appeals for Veterans Claims, including $2.5 million to fund legal costs of indigent veterans per this 1991 law.  The second bill put $14.6 million in the coffers of the Court of Appeals for the Armed Services.

Fun fact: H.R. 6157 was a consolidation of the Department of Defense Appropriations Act (which had the funding the Armed Services Court of Appeal) and the Departments of Labor, Health and Human Services, and Education, and Related Agencies Appropriations Act.  Apparently, the idea was to piggyback the latter group of agencies with the Department of Defense in an attempt to get them funded before the midterm elections.  The strategy worked and a grumpy Donaldoltski signed the bill on September 18, 2018.

So that explains why those two Article I courts are open.  They have money!  More complex is explaining the disparity between the Tax Court and other courts.

Although all the rest of the courts are funded in the FSGG, which is part of H.R. 21, there is a difference in how they are funded.   The Tax Court is funded as part of the appropriations in Division B Title I of H.R. 21 ("Department of Treasury").  All the other courts, including the other Article I courts funded in the FSGG, are funded by an appropriation made to "The Judiciary" which you find set out in Division B Title III of H.R. 21.   That distinction makes a difference.

When the AOC gives its yearly budget proposal to the President, the President must, by law, submit it unchanged to Congress.  31 U.S.C. §1105(b).  But what the President cannot change, Congress can.  At least it can mess around with large parts of the AOC proposal.  Congress cannot change what is called the “mandatory funding.”  This Congressional Research Service Report on Judiciary Appropriations for FY18 gives a very superficial definition of that term on p. 8.  It obviously includes the amounts necessary to satisfy the constitutional command to pay Article III judges an undiminished salary.  But also appears to include some Article I salaries that are statutorily tied to federal district court salaries.   For example, 28 U.S.C. §153 sets bankruptcy judge salaries at 92% of federal district judge salaries.  I confess I don't fully understand how a statute makes the funding "mandatory."  One Congress cannot bind future Congresses.  See U.S. v. Winstar, 518 U.S. 839 (1996).  That's why the Founders made the irreducible salary of Article III judges a constitutional provision.  Congress can always change a statute.  I welcome any comments explaining this.

My confusion is a minor point, however, because mandatory funding amounts to only 8% of the AOC request.  Article III and Article I judges together are still just the tip of the judicial bureaucratic iceberg.  For example, for FY2019, the AOC's Budget Request asked for mandatory funding of $0.64 billion out of a total request of $7.86 billion.  The vast bulk of the judiciary's budget is discretionary, including the salary and benefits for non-Article III employees, such as public defenders, court security, IT folks, jurors, and the good folks over at Administrative Office of the U.S. Courts themselves.

The AO, however, appears to have control over two other sources of revenue that are independent of the yearly appropriations process: (1) court fees; and (2) what are called "no-year" appropriations---money that Congress appropriates but is project-based and may be carried over from year to year.  And that, dear readers, is how the AOC was able to keep funding all the Courts under its administrative supervision, at least through January 18th.   If the Tax Court was funded as part of "The Judiciary" it would participate in the AO's fees and no-year appropriations.  But as it is funded as part of the "Department of Treasury" it must stand or fall, be open or be closed, on its own.  Notice that the Tax Court was able to hold January 14th calendars, despite the lapse of funding.  Query whether that was because it could make similar use of its court fees.

One might ask why the Tax Court has a separate budget process than the Article I Courts covered by the AO's budget request. One reason may trace back to the history of the Tax Court as an independent administrative agency within the Department of Treasury.  Historical inertia is greatly underrated.  For those interested in that history, the go-to book is Brant Hellwig's excellent updating of Harold Dubroff's classic Historical Analysis of the U.S. Tax Court, available on the Tax Court's website.  No serious tax geek should be without a copy!

So the real question may be: why does not the Tax Court now choose to put itself under the AO's budget umbrella?  A reason was suggested to me at last week's ABA Tax Section Meeting in New Orleans (note my deliberate use of passive voice to hide the speaker).  By submitting its own budget request, the Tax Court may be able to better establish and maintain a direct relationship with the relevant appropriation committee, and not have to rely on the AO to act as an agent.  It also may thereby maintain a desirable administrative independence from the AO.

Coda 1: When the Court does reopen, we will likely learn some very interesting lessons about how the shutdown affected various limitations periods.  The folks over at Procedurally Taxing are exploring that topic this week.

Coda 2: H.R. 21 contains funding for the IRS as well as the Tax Court and the Judiciary.  And it contains restrictions on how the IRS can use the funding.  I found this one particularly interesting:  112. Except to the extent provided in section 6014, 6020, or 6201(d) of the Internal Revenue Code of 1986, no funds in this or any other Act shall be available to the Secretary of the Treasury to provide to any person a proposed final return or statement for use by such person to satisfy a filing or reporting requirement under such Code.  Wowsi Wow Wow!  Is that a prohibition on the IRS developing a ready-return system??  I am sure that is not the result of crass lobbying by---oh, let's see, HR Block and Intuit?---but is rather a well-considered policy decision that the IRS ought not to be providing such services to taxpayers.