How Law Schools Are Using Virtual Reality In The Classroom 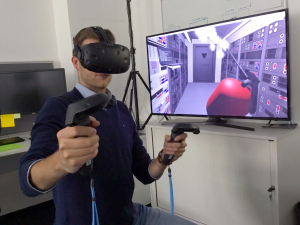 This past summer at the University of North Texas Dallas College of Law, a small team of law students and school employees created a virtual reality crime scene. There was blood made of ketchup, a stapler, handprints and of course, a dead body. Using a 360-degree camera, the team staged an imaginative crime scene.

“It was an experiment at the request of a criminal law professor,” says Jennifer Wondracek, director of legal educational technology at the school. “We did it low-budget because we were trying it out.” The professor liked it, Wondracek says, and asked for another that could be used to supplement classroom material.

The University of Kansas School of Law, like a growing number of law schools across the nation, is starting to teach its students cutting-edge quantitative subjects such as data analysis and artificial intelligence.

Before his academic career, Torrance practiced biotechnology patent law at Fish & Richardson. With both a law degree and a doctorate in biology from Harvard, Torrance now teaches and conducts research in patent law, intellectual property, and empirical, experimental and big data approaches to law, among other topics.

Torrance said his hope with the new course was “to introduce students to progressively more sophisticated methods for tackling legal issues.”

Such methods include computational approaches involving Big Data and AI analysis. The semester ended with the students experimenting with legal analytics and AI tools, which were donated by legal tech companies. These tools let students find answers to legal questions “in minutes” that formerly took “weeks to complete,” Torrance said.

For instance, the law school reported that students used Robot Lawyer LISA, which can draft nondisclosure agreements in about 20 minutes, and Donotpay.com, a website that helps dispute traffic tickets. ...

Torrance said there is always the risk of math-related topics causing a phobia among law school students. He knew from the start he had to find a remedy for this potential fear. “I created the class deliberately to make students from all levels of mathematical and scientific backgrounds feel comfortable learning these methods,” he said. “I think this succeeded because everyone in the class was able to participate and meaningfully apply what they learned.” Moreover, Torrance noted he “avoided tests and exams” in the course, and instead had students undertake “projects” where they “could feel in control.” ...