Second, the vast majority of law schools, with a focus on improving entering class profile, chose to take fewer students then they might have.  Across 194 fully-accredited law schools that welcomed entering classes in both 2017 and 2018 (excluding the three law schools in Puerto Rico), there are 582 reported data points for LSAT and for UGPA.  For the LSAT, 332 of the 582 increased (57%); for UGPA 352 of the 582 increased (60.5%).  This is a remarkable change from    recent years.

Third, looking at the overall “strength” of the class from the standpoint of distribution of law schools based on median LSAT, this would appear to be the strongest entering class since 2012.

TABLE 1:  ENROLLMENT GAINS ACROSS LAW SCHOOLS BY CATEGORY BASED ON MEDIAN LSAT IN 2017

LAW SCHOOLS COULD HAVE INCREASED ENROLLMENT MORE, BUT CHOSE TO INCREASE PROFILE

Why would these law schools with median LSATs of 160 or higher forego the added revenue from additional students?  For some law schools it might have been because they had “right-sized” their law school human capital to a smaller population of students and it didn’t make sense to grow first-year enrollment any more than they might have been doing already.  Some law schools might have been conscious of an employment market that has not rebounded significantly and might have refrained from adding too many students in an effort to avoid having less than stellar employment outcomes three years from now.  But for some, as the data below suggest, it would appear to be to increase (or at least maintain) their LSAT and UGPA profile that is reported to USNews for its annual rankings (comprising 22.5% of the rankings score combined).  (It also is possible that among this larger group of applicants with high LSATs of 160 or higher there was a certain selectivity in terms of whether and where to enroll.  It could be that a larger percentage of these applicants than in past years chose not to enroll if they did not get into their school(s) of choice or chose to enroll in a law school with a lower LSAT profile in response to a generous scholarship offer.)

TABLE 3: NUMBER OF LAW SCHOOLS WITH INCREASES IN 50th PERCENTILE UGPA IN 2018 BY CATEGORY OF LAW SCHOOL BASED ON MEDIAN LSAT IN 2017 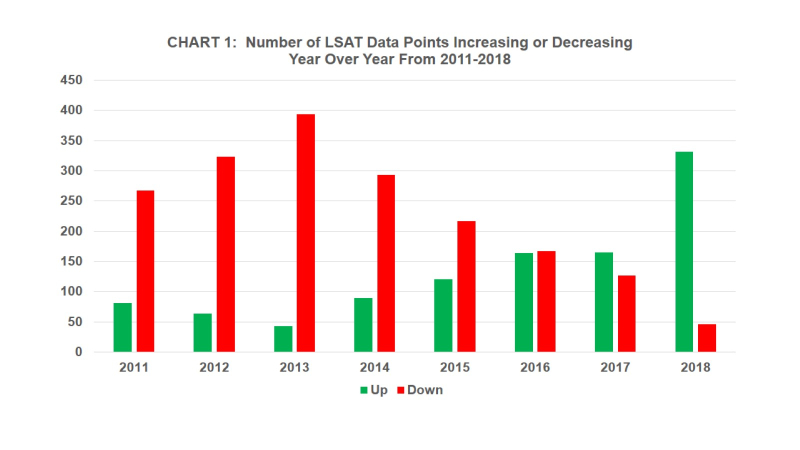 Table 4 looks at the average increase in each LSAT or UGPA data points across categories of law school based on median LSAT in 2017.  Interestingly, the largest average increase for the 50th LSAT (1.05) and the 25th LSAT (1.34) occurred among law schools with an average median LSAT of less than 150 in 2017.  Given that these law schools are not really playing the “rankings game,” this effort to increase LSAT profile would appear to be a concerted effort to improve the quality of the entering class for many of these law schools with an eye toward improving bar passage upon graduation.  This may well be a response to the ABA Section of Legal Education and Admissions to the Bar paying increasing attention to law schools with poor bar passage performance and employment outcomes which are seen as being related to lower entering class profiles in recent years.

TABLE 4: AVERAGE INCREASES IN LSAT AND UGPA PROFILE BY CATEGORY OF LAW SCHOOL BASED ON MEDIAN LSAT IN 2017

On the whole, this stronger applicant pool combined with increasing selectivity among law schools, has meant that the Fall 2018 entering class might be the strongest entering class in terms of LSAT credentials since 2012.  This is shown in the following charts.

Chart 2 shows the number of law school with LSAT medians in each of six LSAT categories since 2010. 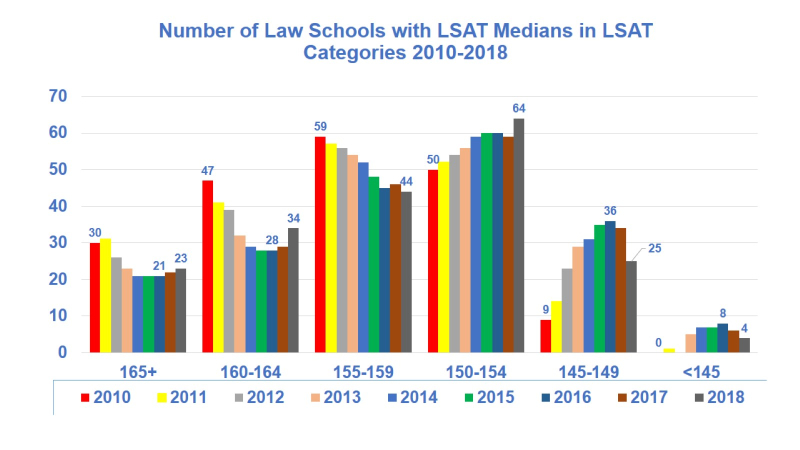 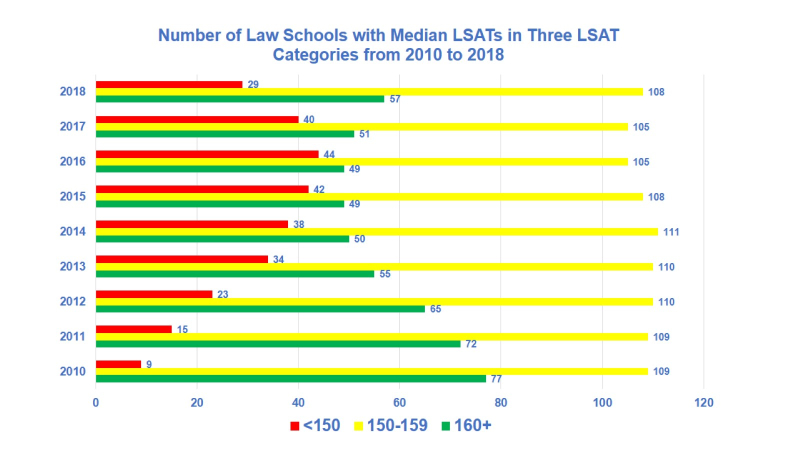 Please note that the Spivey information concerning median LSAT for The University of Baltimore is incorrect. Median LSAT for the 2017 incoming class, 2020 graduating class, was a 152 not 157.