WSJ: U.S. Grip On Higher Education Market Is Slipping; University Of Illinois Pays $424,000 For $61 Million Lloyd’s Of London Policy To Hedge Against Decline In Chinese Students

Wall Street Journal,  U.S. Grip on the Market for Higher Education Is Slipping:

The American higher education system, the largest in the world and a major source of revenue for towns and cities across the U.S., is still dominant as a global magnet for top talent, but is losing market share. The U.S. has 24% of the global market, far ahead of the U.K. with 11%. 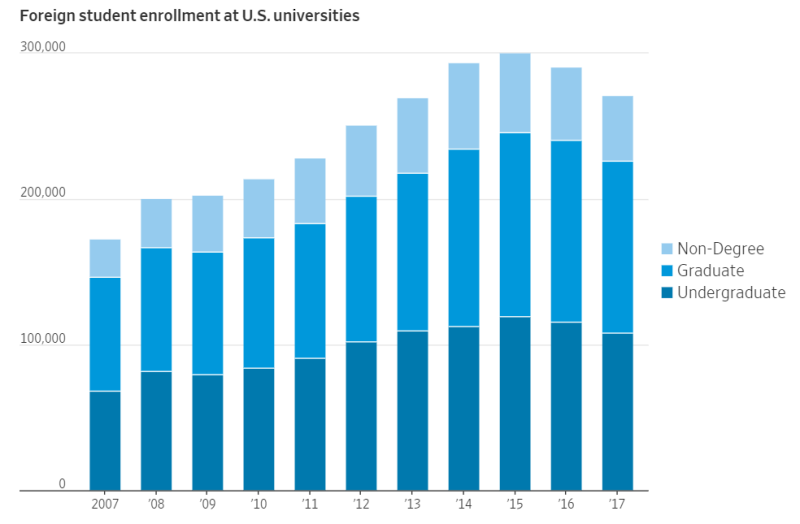 “If we can no longer attract the best students, if we’re not seen as the go-to place, there are consequences down the line for us in research, national security, everything,” said Mary Sue Coleman, president of the Association of American Universities. “We can’t wall ourselves off.” ...

The U.S. has seven of the top 10 spots in global university rankings, but this year its overall number in the top 200 schools dropped to 60 from 72 in 2010, the first year of the Times Higher Education World University Rankings. Seven Chinese schools cracked the top 200, up from just two in 2014.

Some American schools are getting worried they have gotten overexposed to international students. Last year, the University of Illinois at Urbana-Champaign colleges of engineering and management paid $424,000 for a $61 million insurance policy underwritten by Lloyd’s of London to hedge against a pandemic or a political disruption that might cut off the supply of Chinese students.

Chinese students represent between 15% and 20% of the school’s revenue, said Jeffrey Brown,  dean of the business school. “What happens if suddenly they’re gone?” he said.

Inside Higher Ed once had a multi-thousand word piece on how U of Illinois was relying on Chinese enrollment and tuition dollars to an inordinate extent; I believe that the most recent freshmen class when the article was published in 2015 or 2016 was ~10% from mainland China. So it's not exactly a representative example of American higher ed w.r.t. Chinese enrollment, is what I'm getting at, any more than Harvard's endowment is representative of American university endowments.

Why not take more of the apparently qualified domestic students they've been passing up for social engineering?