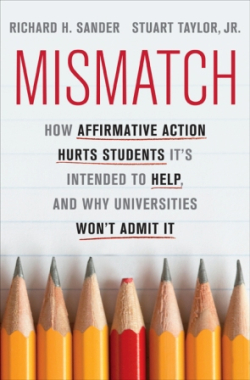 It has been a busy month for Richard Sander, the polarizing University of California at Los Angeles School of Law professor whose controversial “mismatch theory” claims that affirmative action policies actually hurt some minority students by thrusting them into academic situations where they are more likely to struggle.

He’s spent years fighting the State Bar of California to obtain ethnicity and bar pass data that would allow him to look at how individual law students performed on the licensing exam. Earlier this month, the California Supreme Court declined to take up his appeal. (A trial court judge ruled against Sander in 2016, as did an appellate court earlier this year.)

But Sander isn’t giving up. He filed a lawsuit in state court on Nov. 15 seeking to compel the University of California system to turn over admissions and outcomes data. Sanders expects the data to show that the 10 campuses within the system are using racial preferences to admit more black and Hispanic students, despite Proposition 209—the 1996 law prohibiting public universities in the state from granting any racial preferences in admissions—and provide further evidence of his mismatch theory.

He obtained a similar data set from the University of California 10 years ago, but now university officials say providing the data would require the creation of a customized database. Moreover, a system spokeswoman said its schools don’t consider race in admissions.

Law.com caught up with Sander this week to discuss the new lawsuit and the professional price he has paid for taking on affirmative action. His answers have been edited for length and clarity. ...

Do you think you have paid a professional price for taking on such a fraught issue and pursuing it relentlessly?

Absolutely. The elite law schools are not comfortable inviting me as a speaker to discuss my scholarship the way that colleagues do. When I’m asked to speak somewhere, it’s almost always in a debate format as opposed to just presenting my ideas. There are occasionally actions among the students at UCLA that target me, usually based on not having any idea what my research actually is, but the general reaction is that this is anti-PC research and should be resisted. There have also been opportunities to engage in a broader discussion about affirmative action. I’ve made my peace with the advantages and disadvantages of going public on these issues. The goal here is to try to improve minority achievement and to diversify the legal profession. If we can’t have a discussion about something that’s that well-intentioned, then we’re kind of in bad shape as institutions dedicated to uncovering truth.

If students - of whatever backgrounds - toward the low end of the admissions criteria are *not* doing less well on average, wouldn't that mean the criteria need reconsidering to not arbitrarily exclude good candidates, not inflate per-student costs (a particular problem for working-class families!), and not deprive the state of good lawyers and great justice?

Why is he controversial and polarizing as opposed to the people on the opposite side?

So basically Sanders has convinced himself that he can tell, just by looking at them (cough), if a student academically belongs in the UC system or not and has engaged in prolonged litigation against his employer in order to get data sets that he can cherry-pick to his heart's content (and as best fits his *study's* pre-determined conclusion). And he wonders why other schools shun him. What a mystery.

And I keep forgetting: does mismatch theory apply to someone like Abigail Fisher, who literally couldn't point to more than one accepted African-American student to UT with a lower internal AI/PAI index than she had?