The Golden Age Of Rich People Not Paying Their Taxes

The Atlantic, The Golden Age of Rich People Not Paying Their Taxes:

An eight-year campaign to slash the IRS’s budget has left the agency understaffed, hamstrung, and operating with archaic equipment. The result: a hundred-billion-dollar heist. ...

Had the billions in budget reductions occurred all at once, with tens of thousands of auditors, collectors, and customer-service representatives streaming out of government buildings in a single day, the collapse of the IRS might have gotten more attention. But there have been no mass layoffs or dramatic announcements. Instead, it’s taken eight years to bring the agency that funds the government this low. Over time, the IRS has slowly transformed, one employee departure at a time.

The result is a bureaucracy on life support and tens of billions in lost government revenue. ProPublica estimates a toll of at least $18 billion every year, but the true cost could easily run tens of billions of dollars higher.

The cuts are depleting the staff members who help ensure that taxpayers pay what they owe. As of last year, the IRS had 9,510 auditors. That’s down a third from 2010. The last time the IRS had fewer than 10,000 revenue agents was 1953, when the economy was a seventh of its current size. And the IRS is still shrinking. Almost a third of its remaining employees will be eligible to retire in the next year, and with morale plummeting, many of them will.

The IRS conducted 675,000 fewer audits in 2017 than it did in 2010, a drop in the audit rate of 42 percent. But even those stark numbers don’t tell the whole story, say current and former IRS employees: Auditors are stretched thin, and they’re often forced to limit their investigations and move on to the next audit as quickly as they can. ...

Corporations and the wealthy are the biggest beneficiaries of the IRS’s decay. Most Americans’ interaction with the IRS is largely automated. But it takes specialized, well-trained personnel to audit a business or a billionaire or to unravel a tax scheme—and those employees are leaving in droves and taking their expertise with them. For the country’s largest corporations, the danger of being hit with a billion-dollar tax bill has greatly diminished. For the rich, who research shows evade taxes the most, the IRS has become less and less of a force to be feared.

The story has been different for poor taxpayers. The IRS oversees one of the government’s largest anti-poverty programs, the earned income-tax credit, which provides cash to the working poor. Under continued pressure from Republicans, the IRS has long made a priority of auditing people who receive that money, and as the IRS has shrunk, those audits have consumed even more resources, accounting for 36 percent of audits last year. The credit’s recipients—whose annual income is typically less than $20,000—are now examined at rates similar to those who make $500,000 to $1 million a year. Only people with incomes above $1 million are examined much more frequently. 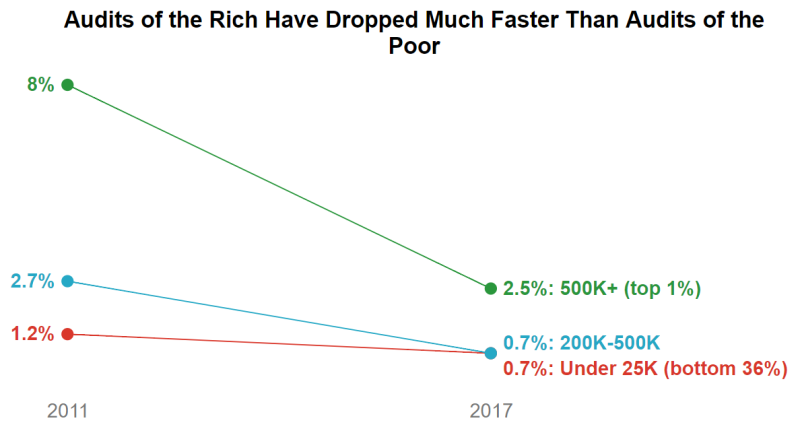 In ProPublica’s interviews with dozens of tax professionals and more than 50 former and current IRS employees—part of an ongoing series on the state of tax enforcement—many agency veterans wondered whether the damage of the past several years will ever be undone. And they had a greater worry: that the American public will inevitably realize how weak the IRS has become.

Our deficit is blowing up, compliant taxpayers feel taken for chumps - and the greater worry is that the American public will find out?!?

Why not start with fixing problems in spending the current budget, like closing big audits secretly, for pennies on the dollar, and for reasons that the watchdog Treasury Inspector General for Tax Administration found not to add up?

Google TIGTA's 2016 and 2017 reports, "Barriers Exist to Properly Evaluating Transfer Pricing Issues" and "Better Documentation Is Needed to Support Office of Appeals' Decisions On International Cases" for what the big guys must have puzzled out long ago.

Does the 1998 reform bill really tie their hands to just "churn out the exams" without thinking about results?

Section 1.5.2 of the Internal Revenue Manual, discussing the apparently relevant section 1204 of RRA 1998, seems to contrast evaluating employees on case results regardless of merit versus considering dollar amounts as a part of case selection and resource management. And isn't Rev. Proc. 64-22 still on the books?

"Adminstration...should never try to overreach...It should, however, be vigorous in requiring compliance with law and it should be relentless in its attack on unreal tax devices and fraud."

Just my personal 2 cents (hey, apparently not way too small to settle for...)

The earned income credit is a welfare program that is a magnet for fraud; estimates run as high as 30%. The Trump administration is hiring Revenue Agents (auditors), Revenue Officers (collectors), and Special Agents (criminal Investigators), something Obama did not do.

Maybe next time they won't allow themselves to be weaponized by a political party. Because too many government employees have a political bias towards bigger government.

The moral bankruptcy of this trend is that we are left with a tax system that places a disproportionate burden on wage earners and wealthy people possessed of integrity. The big winners are dishonest wealthy individuals.