Just Giving: Why Philanthropy Is Failing Democracy And How It Can Do Better 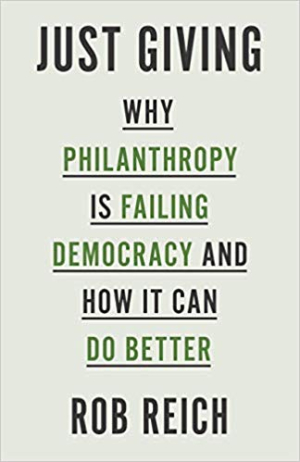 Critics take aim at government policy when it fails, in their view, to sufficiently encourage donations to charity. In “Just Giving: Why Philanthropy Is Failing Democracy and How It Can Do Better,” Rob Reich, a Stanford political-science professor, argues that a more fundamental question needs to be asked: Why should government policies encourage philanthropy at all?

Throughout history, Mr. Reich says, religious and ethical traditions have provided people from many backgrounds with powerful reasons for giving. If governments are to play a role, Mr. Reich argues, they need a different kind of justification: a political one. They need to be able to identify the ways in which charity achieves public purposes, and for him the greatest public purpose is that of promoting equality. A policy that fails in this regard, he believes, is shaky at best and perhaps unjustifiable.

The main problem with current policy, Mr. Reich argues, is that it confers more benefits on the well-to-do than on others: think of those tax-deductible gifts and estate bequests, whose value to the individual increases with the wealth of the donor. Inevitably, he says, a policy that encourages people to give liberally to charity winds up reinforcing inequality: It directs resources to institutions that the better-off prefer, such as well-financed schools, prestigious hospitals and elite cultural organizations. Meanwhile, schools, programs and projects whose purpose is to help the less well-off find themselves in need of money. Mr. Reich is concerned as well about wealthy grant-making foundations, such as Gates, Ford and Rockefeller: In his view, they enable the super-rich to influence public life long after the deaths of their founders, and, beyond minimal rules, they don’t have to account to anyone for how they spend their money.

As a faculty member at a well-endowed university, Mr. Reich is understandably reluctant to conclude that philanthropy has no place in a well-run democracy. Thus he urges a change in the operating rules that government creates for it. ...

[M]ost cultures have long viewed giving and volunteering as personal virtues, justified by their proper practice and not necessarily by what they accomplish. And most cultures have adopted a variety of measures, including government policies, to prod their populace to be virtuous. Tocqueville understood this when he praised American civic traditions because they not only delivered useful services but also taught Americans how to be good citizens. By contrast, Mr. Reich believes philanthropy needs to be justified by its instrumental value, especially its egalitarian effects. Yet in a society that already places a premium on equality and its pursuit, philanthropy may be at its most valuable when it pursues other goals.

Reich is wrong. True charity is about helping those in need. A person with a properly ordered conscience would happily endorse policies that promote the fulfillment of basic needs even if those same policies result in greater inequality. Obsession over equality rather than poverty exposes rank envy.

Is it so bad for the government to just "step back" by deducting what is broadly a charitable gift (with basic public-benefit and anti-self-dealing rules) from the tax base?

Have government-micromanaged schools and healthcare been the be-all and end-all of promoting equality--especially at a good level--or planning for sustainability?

From the book's Amazon summary: "Differentiating between individual philanthropy and private foundations, the aims of mass giving should be the decentralization of power in the production of public goods, such as the arts, education, and science. For foundations, the goal should be what Reich terms 'discovery,' or long-time-horizon innovations that enhance democratic experimentalism." Nothing wrong with either of those, but wouldn't a narrow view of "equality" stifle the latter?

By the way, Wikipedia reports the largest foundation, with the two biggest philanthropists (one not even adding his name) is set up to spend rapidly -- largely for core poverty relief -- and wind up promptly not because that is required, but because they think that is wisest.

The likelihood that government will define "charity" is a way that is self-serving and to adopt it's own social-engineering goals is too great. Individuals need to decide for themselves what goals their charity should advance. Not government.