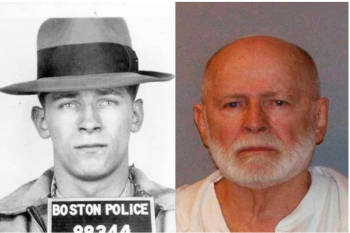 In the years leading up to his death in jail last week, notorious Boston mob boss James "Whitey" Bulger wrote about his regrets in life.

Bulger, imprisoned for life for his role in 11 murders, wrote a letter to three teenage girls in 2015, telling them he was "a ninth-grade dropout" who "took the wrong road". The former mobster said he was among "society's lower, best forgotten" members. He told the students, who had first written to him for a school history project, not to spend their time on him. "My life was wasted and spent foolishly, brought shame and suffering on my parents and siblings and will end soon," he wrote.

The US Bureau of Prisons confirmed that Bulger (89) died last Tuesday at the jail in Bruceton Mills, West Virginia.

After being choked and beaten to death in his prison cell, Bulger was wrapped in a blanket and placed in his bed to make it look like he was sleeping. Bulger's killers went so far as to rest his head on the pillow after striking him repeatedly with a padlock stuffed inside a sock, said law enforcement officials. ...

The three high school students - Michaela Arguin, Mollykate Rodenbush and Brittany Tainsh, all from Massachusetts - decided to build their project around Bulger, the former boss of Boston's notorious Winter Hill Gang. Arguin said that the theme was leadership and that, rather than choosing a positive leader, they chose a negative one, asking Bulger what he thought about his own legacy. ...

Captured in California in 2011, Bulger was sentenced to two consecutive life terms plus five years after a Boston jury convicted him of 31 racketeering offences. The indictment against him catalogued 19 alleged murders, and he was found guilty of ordering or carrying out 11 of them. The verdicts in 2013 climaxed a gangland opera of fealty and betrayal that spanned half a century and combined two of Boston's abiding fixations: crime and politics.

But on February 24, 2015, Bulger replied to the students' letter from federal prison in Florida declining to participate and urging the teenagers to find a "more deserving" subject, such as a wounded service member. ...

Bulger told the students: "Advice is a cheap commodity. Some seek it from me about crime. I know only one thing for sure — If you want to make crime pay, 'Go to Law School'."

"It's something you wouldn't think a mob boss would say," Arguin said.

However Arguin, who is a pre-law student, said she has taken up Bulger's suggestion and plans to go to law school - and study criminal law.

@cadman: someone should write a book about that. Hmm... two people have.
Look on Amazon for Sydney Powell's "Licensed to Lie" and my own "I'm from the Government and I'm Here to Kill You: The Human Cost of Official Negligence." Both books hit the Department of Justice pretty hard.

Even though his statement can mean three different things, today’s events prove he meant: if you want to make piles of money in a criminal enterprise then join the government so you can do it while hiding behind the law and make it all appear legitimate

This reminds me of Vito Corleone's mantra from The Godfather novel: "A lawyer with a briefcase can steal more money than a hundred men with guns." I've never been fully convinced of the statement's veracity.