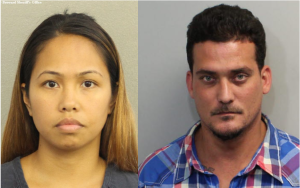 The two suspects accused of plotting and executing the murder of Florida State law professor Dan Markel will face a jury next summer.

A June 3 trial date was set for Sigfredo Garcia and Katherine Magbanua on Tuesday, nearly five years after Markel was gunned down in his Trescott Drive garage in what investigators say was a murder for hire plot.

Garcia and his girlfriend Magbanua face charges of first-degree murder, conspiracy to commit murder and solicitation of murder. They have both pleaded not guilty to all charges. ...

Their motive was a $100,000 payout by the family of Markel’s ex-wife, Wendi Adelson, following the couple’s contentious divorce, Tallahassee Police say.

Investigators say Adelson’s mother and brother — Donna and Charlie Adelson — paid to have Markel killed because of the family’s desire to have the couple’s two young sons move to South Florida after the split.

The Adelsons have denied any involvement in the killing and call TPD’s theory “fanciful fiction.” No one in the family has been charged.