Bakija Presents Would A Bigger Government Hurt The Economy? Today At Pennsylvania 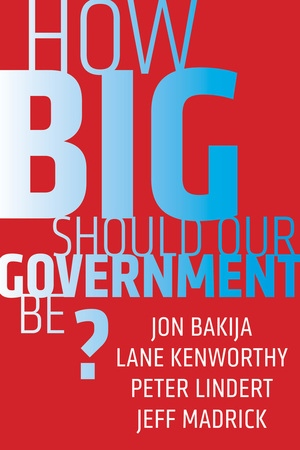 If the United States is going to meet the rising costs of promised government retirement benefits and health care for the elderly while doing more to promote economic security, equality of opportunity, and shared prosperity, it will eventually need to increase taxes. Is this the best solution, or should we scale back government and cut taxes, thereby improving incentives for productive economic activity? This is the fundamental political dilemma of our times. A thoughtful answer ought to depend on many different considerations, but one of the most critical is the long-run economic costs and benefits of larger government and the taxes that go with it. I begin by briefly reviewing some theory that helps to put the debate into perspective. Then I consider evidence on three key empirical questions:

How does the long-run economic growth of countries relate to the overall level of taxes and size of government? What is the effect of taxation on peoples’ decisions about whether and how much to work? How do taxes affect effort to earn income more generally, especially at the top of the income distribution?