Can the TCJA Save The Corporate Income Tax?

Rice University Baker Institute for Public Policy, Can the TCJA Save the Corporate Income Tax?:

The tax cuts passed by Congress and signed into law by President Trump last year offer a starting point offer for revitalizing the corporate income tax (CIT), according to experts at Rice University’s Baker Institute for Public Policy.

Jorge Barro and Joyce Beebe, fellows in public finance, outlined their insights in a new issue brief,  Can the TCJA Save the Corporate Income Tax?. The brief provides a historical overview of the CIT, its key provisions and the implications of the 2017 Tax Cuts and Jobs Act (TCJA) for businesses.

"Before the TCJA, the CIT was one of the most criticized taxes in the U.S.,” the authors wrote. “The statutory tax rate was high, the tax base was narrow and the tax could be avoided by switching to a different business structure or by shifting corporate profits to a different jurisdiction. However, practical and theoretical considerations indicate that the CIT is here to stay. Therefore, reform instead of repeal has long been the focus of CIT discussions."

The corporate income tax share of total federal government revenues has been steadily declining since the end of World War II. 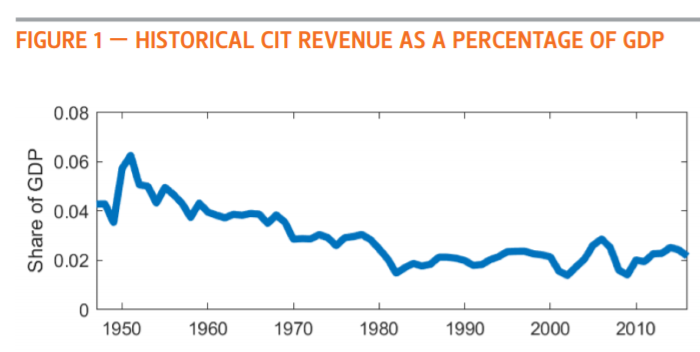 Immediately after the war, the CIT accounted for approximately 30 percent of the federal government’s gross receipts. In the 1960s and 1970s it decreased to less than 20 percent, and the next two decades witnessed a further decline to 10 percent, a level at which it has hovered ever since. While some of this decline has been caused by reductions in the corporate tax rate, much of it is attributable to a declining corporate tax base, the authors said. Total CIT revenue as a share of gross domestic product (GDP) has also trended downward over time, the authors said. Although the statutory corporate income tax rate was higher than that of other countries before the 2017 tax cuts, the U.S. collected a smaller share of CIT revenue as a percentage of GDP. "The cause of this perplexing phenomenon of high-rate, low-revenue collection has been the focus of the corporate tax reform discussion for decades," the authors wrote.

The most significant provision of the 2017 tax legislation was the substantial reduction of the statutory federal CIT rate from 35 percent to 21 percent. "This will directly affect all corporations, but the immediate impact is most significant for multinational corporations, whose international profit-shifting activity is discouraged by the rate reduction," the authors wrote.

The authors said it is no surprise that academic scholars, lawmakers and the private sector all have different views regarding how to repair the corporate income tax, and all parties have legitimate reasons to hold different perspectives. "The TCJA provided a political solution to the drawbacks of the CIT," the authors wrote. "The base-broadening and rate-reducing features appeal to academia, and the significant rate reduction and favorable repatriation rate is well-received by industry. U.S. businesses are facing an unprecedented low-CIT environment and a business-friendly atmosphere that is certain to compete with low-tax jurisdictions."

The authors concluded, "Many issues remain, such as looming deficits, still complex compliance procedures, and the uncertain longevity of the TCJA’s corporate provisions. There is not a single panacea for the CIT. What is required is to find a compromise that everyone can live with. The TJCA offers a starting point for such a compromise to revitalize the CIT."