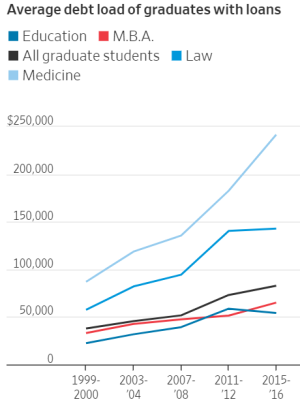 When Temple University said in July that its business school had misreported student data for U.S. News & World Report’s annual M.B.A. rankings, the school disclosed another troubling error: It had understated the debt load its typical business student carried after graduation.

U.S. News ranked the online master’s in business administration at Temple’s Fox School of Business as the nation’s best for four years running, including in 2018, before Fox admitted in January to reporting inflated standardized-test scores. Since then, the university has found Fox staff submitted other incorrect information for six additional Fox programs, and in some instances did so “knowingly and intentionally.”

Some of the inaccuracies concern student-debt records. Fox told U.S. News & World Report that 40% of its online M.B.A. students who graduated last year had loans, owing an average of $16,275 apiece. According to the July report, Fox had included graduates with zero loans when calculating students’ debt burdens from 2016 to 2018, which lowered the average amount. Temple declined to say how much debt its approximately 100 online M.B.A. graduates who had loans last year actually held for the $60,000 degree.

Trying to calculate the financial burden of earning an M.B.A. or another graduate degree is one reason many would-be students say they turn to school rankings. Unlike undergraduate programs, master’s and doctoral programs aren’t required to publicly disclose how much students borrow or earn after graduating, making it hard to gauge the financial payoff for a pricey degree. ...

Debt levels and graduates’ future salaries—which schools typically self-report—are especially critical because they help prospective students gauge how much an M.B.A. might strain or enhance their finances. ...

Among graduate students, law and medical students typically borrow in the greatest percentages and largest sums. They owed an average cumulative debt of $143,000 and $242,000 in 2016, respectively, while M.B.A. students with loans took out an average of $65,000, according to the latest Education Department data. Yet business programs are much more popular. More than 187,000 master’s degrees in business were awarded in 2016, compared with 55,000 law- and medical-school diplomas combined, federal data show.